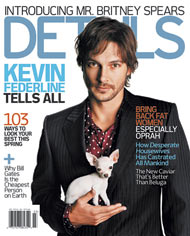 I got my March issue of Details magazine the other day with KFed (what Keeter calls Kevin Federline aka Mr. Britney Spears.) So I decide today I should break the spine and see what the appeal is because UsWeekly seems to think Brit and KFed are America's version of Becks and Posh or "Bennifer 2005".

In this riveting interview we learn a lot about this fascinating man. He was not only a dancer (which is news to me) but he was once a very talented pizza delivery man who's philanthropic efforts include dancing to get kids off the streets. We also learn his son's name is Kaleb Michael Jackson Federline. He wants to start a clothing line called "Pair A Dice" - because as he puts it, "Dice are lucky for us." And that he was once bitched out by Rosie O'Donnell.

On why Brit married KFed:"That's why I married him, because he's not a shallow motherfucker Hollywood-actor guy."

KFed on the tabloids:"You know fuck, Britney and I have been through a lot of shit."

KFed on Britney's support:"I mean she's fucking proud of me. I could be sitting at home doing nothing. I could be playing fucking video games."

Brit on the future:"I think Celine Dion, the way she does it, with her show in Vegas, is the way to go. Everyone comes to her. When I have kids, I'm so there. That's what I'm doing: "Come to me, motherfuckers.""

It's now quite clear to me why Britney Spears married this man! Please do yourself a favor and buy several issues of this edition!