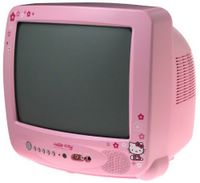 Lost came on last night and we finally got to hear Hurley's story. He's a cursed millionaire and he believes that he may have caused the crash. All through the episode we are shown examples of how Hurley is cursed and how he came across the numbers but we still aren't any closer to any real answers. Why did they survive? What did he say to the crazy French lady? What do the numbers mean? Which fragrance did French lady wear before she came to the island?

I bet a lot of people are going to use those numbers to buy lottery tickets! I'm not a gambler and have never bought myself a lottery ticket but for those interested in the lottery, the numbers are: 4 8 15 16 23 42 (42) was the bonus number.

I also had recorded Gilmore Girls and saw it last night. It's getting too stressful to watch that show. I think Emily needs a giant smack down for trying to break Luke and Lorelai up! Rory has since slept with two men since last year, I guess because Lane isn't sleeping with anyone. At the end all was happy...until the next episode!

I also saw Jack and Bobby a show I don't normally follow but it's about the childhood of the man who someday becomes the future president of America. We found out in last nights episode that his father is from Mexico and while everyone thought that he abandoned his family, he in actuality is in prison in America.

The last of the WB shows that I saw was One Tree Hill which has awful story lines and Maria Menounos of Entertainment Tonight now seems to be a series regular. Why I continue to watch this show instead of spending my time deconstructing Lost is beyond me!

Comments:
Ack, I don't know any of those shows! The only show I watch any more is Jon Stewart, and I don't even watch that very often. But -- I want that Hello Kitty tv!!!

Gilmore Girls and Lost are amongst my favorite shows. I'm tired of all the reality television with the exceptions of Project Runway, The Amazing Race and some MTV shows. I think I might buy myself the Hello Kitty tv - it's cute! They sell it at ToysRUs and Target.

You should totally watch Veronica Mars; you would love it!! It's one of my favorite shows -- smart, funny, intelligent, incredibly well acted and written -- and I despair not being able to watch it here in England. It's on UPN during One Tree Hill's timeslot...you'll like it much better (although it features no Chad Michael Murray, but then again he kind of acts like a piece of wood) I promise!!

Anjali! You rock I saw Veronica Mars on last night! It was far better than One Tree Hill! We don't have a WB channel out here (we get the KTLA feed) and we also don't have UPN (It's a German station all day except at night when they show the UPN shows!).

They were playing a basketball game on KTLA last night so I didn't get to see Gilmore Girls or One Tree Hill. Chad Michael Murray is like eye candy (lovely to look at but once he starts talking I must listen to something else!)

I'm going to have to remember to see it again next week. I stopped watching UPN after Buffy was cancelled.