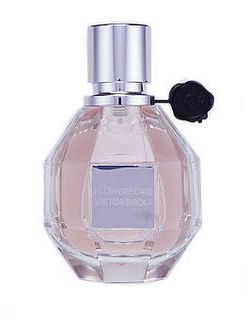 I decided to wear Flowerbomb by Viktor & Rolf today thanks to Sali who sent me a sample. The notes are according to the following article are:

By the name alone, I expected it to be more floral, less patchouli. I now can see why so many people were comparing this to Chanel's Coco Mademoiselle, as both share citrus notes and patchouli. However I find that the citrus to be much heavier and sweeter in Coco Mademoiselle which hide the patchouli more in that fragrance. The patchouli in Flowerbomb however is more predominant and it is then rounded off by the citrus and then the floral notes. I think this would be best suited for a day to night fragrance in autumn or winter but I think it could be incredibly sexy on a cooler spring or summer night. Here in the states it's currently sold at Saks and retails for $95.00/1.7 oz. or $150/3.4 oz.

And when they presented their current spring line in Paris, the look was a sleek all-black wardrobe with models in motorcycle helmets - until halfway through the show when what turned out to be a revolving runway spun to reveal a colorful garden full of gowns.

Knowing their penchant for drama, even the designers' own appearance is surprising. During a recent interview in Manhattan, they could have passed for tourists in their casual clothes while drinking coffee in their hotel lounge.

But their most unforeseen move yet might be the launch of their debut fragrance, Flowerbomb.
Eschewing the haute-couture or avant-garde routes that would seem natural for them, Viktor Horsting and Rolf Snoeren teamed with cosmetics giant L'Oreal.

"It was unexpected but very exciting," Snoeren says about the partnership. The designers say they share L'Oreal's goal of introducing Viktor & Rolf to many more consumers than the fashion insiders who make up most of their current client base.

"There always was a clear understanding that we didn't want a niche fragrance. We wanted quality and beauty, with a story to tell, and we wanted it to be big," Horsting says.

Finishing the thought, Snoeren adds, "You can have quality and still be big." They think a broader audience will understand their message of dissecting cliches they have so far conveyed by putting models in chic evening wear while wearing antlers on their heads. "The story we have to tell is universal," Horsting says. "The essence of our work is complexity. There's humor, there's seriousness. We mix the explosive with the romantic, the unexpected with the classical."

They note that despite the theatrics of their fashion shows, they grew up in a suburban neighborhood and can can speak the language of the masses. (The 35-year- old designers acknowledge, however, that as teenagers they were fascinated by Hollywood glamour and that they no longer are in touch with their childhood playmates.) The big picture of fashion has room for pieces that are wearable, others that are "art" and some that blend the two, Snoeren says. The designers did indeed graduate from the Dutch Arhnem Academy of Art.

Flowerbomb was three years in the works, and Viktor & Rolf started with the name.

"We were drawn to flowers, but we knew that we didn't want one flower. We wanted an explosion, and 'Flowerbomb' is a a message for the times we live in. It's positive, it's finding a positive in negative," Snoeren says.

The scent includes top notes of tea and bergamot, a heart of jasmine, hints of orange tree, orchid, freesia and rose, and a base of patchouli, which has been made more woody than earthy by redistillation of the essence. The bottle mimics a diamond.

Horsting and Snoeren were very involved in each stage of Flowerbomb's development, saying they're not the type of people who would simply put their name on something. "The fragrance is part of the DNA of Viktor & Rolf," Horsting says.

In fact, Snoeren says, Flowerbomb was treated as if they were creating one of their collections.
"We always start with a story. We treat our show as a performance, and the clothes are actors in the show conveying our message. The collections are reflections on each other, and they are very personal."

"It's all about us and where we are and where we're headed toward the future," Horsting says.

Comments:
Two people on board said it smells like Tocade. I don't smell enough rose in it to connect the two perfumes. I smell vanilla strongest in Flowerbomb along with a somewhat berrylike (cherry? Heliotrope? Anise?) note and headspace tech clear florals that turn creamy on skin.

This comment has been removed by a blog administrator.

Hello ladies! I tested this twice and came away with a clever blend on POTL and Coco Mlle on my skin. I cannot say it is bad - a lot of vanilla - it did not make me rush out and buy it. The second time I tried this I liked it better - so who knows maybe after the 10th I will get a bottle. ;D

On me it's it's a patchouli heavy fragrance. I can easily see the comparison between Coco Mademoiselle and Flowerbomb. I did get a little bit of a sweetness to it after a while but not enough to label it as a sweet fragrance - or even a floral. I'd file this under patchouli!

I think you smell more patch than I do in Flowerbomb, but then again I also don't smell much patch in MV2 which I think is vanillic sweet although people swear up and down there's tons of patch in it. I see the Coco Mlle comparison too but to me Coco Mlle isn't creamy and so the florals and patch are more obvious to me. So I have a vanilla-heavy nose.