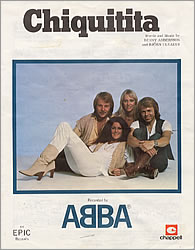 Chiquitita popped into my head yesterday and it's been playing in there ever since. I love ABBA and the uberfabulousness that they are. My best friend Connie once mentioned that Chiquitita is her song because her Dad calls her that. This is one of the many songs I know by heart so I started singing it. I then mentioned to her that I also knew the lyrics to the Spanish version which I didn't really, I had only heard it once before. She asked me to sing that version, I was able to sing the first line and then I was found out. I'm going to teach myself the Spanish version so that I can sing it to her.

Comments:
I absolutely adore ABBA - have most of their music. The other day I saw a programme on Belgian TV about their reunion recently in London (at the MamaMia show) but sadly Agnetha did not turn up. It was so nostalgic seeing them look so mature - makes me think how time flies.

I just love ABBA! I even love when other people sing ABBA songs such as Erasure or A-teens! The music is incredible and timeless really!

Big Abba fan here. My personal favorite is S.O.S. I used to argue with a british friend on which song was superior...Dancing Queen(him) and SOS(me). He always won by popular vote. I think SOS was the critic's choice.

My favorite ABBA song is "Gimme, Gimme, Gimme." But it's so hard to narrow it down to one, so many of them are so wonderful!