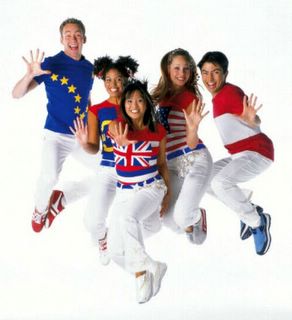 "So many animals inside of me. So many animals - Set them free!" That's part of one of the many quirky songs that Hi-5 sing on their show. Because I couldn't sleep yet again last night I was channel surfing and after seeing an old rerun on The Issac Mizrahi show, I finally settled on watching Hi-5.

The show is clearly made for the pre-schooler crowd, yet here I am at 5:30 in the morning enamroured by it! But wait, there was profanity in the show! One of the characters while singing about his puppy was wearing a shirt that had writing all over it but where he was holding the picture of his puppy it said ASS in capitol letters.

Of course it had a few letters after ASS but because he was holding up the picture, you were unable to see what the shirt was meant to have said. Was it ASSHOLE? ASSWIPE?

It looked like it could have said ASSLOUP but that doesn't make sense and I couldn't really tell because he had the picture of the puppy hiding the rest of the letters!

I think it was a subliminal message for the pre-schooler crowd!