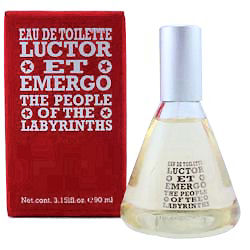 I'm wearing Luctor et Emergo by The People Of The Labyriths Eau de Toilette. This is a perfect fragrance to chase the frownies away like "The Return of the Crap" morning that I was having.

This is what is written on their site about it: In 1998 The People Of The Labyriths launched its first perfume Luctor et emergo. The search for the right combination took three years. The result is a blending together of different scents into one daring, unmistakably personal bouquet of fresh grasses, various white flowers, vanilla and precious woods without losing the characteristics of each component. Alluding to the precious perfumes of the late 19th century it evokes the challenging spirit of sensual curiosity, androgynous awareness and meditative resources of modern times.

While I found that the EdT was lacking in winter, I find it incredibly haunting in the spring. There seems to be a sort of freshness that must be a mixture of the grasses and flowers at first that I never noticed before in the parfum. That freshness is encompassed by its primarily woody/incensy notes and it doesn't have the same hint of almond and cherries that is found in the parfum either.

I think this is a perfect daytime fragrance to wear on cooler spring or summer days as it would be far too heavy worn in the dead of summer where you can fry an egg on the cement in the middle of July! It is easily a perfect evening fragrance in warmer months as it cools down, at least here at night. It doesn't in Phoenix as I found out last summer on my birthday when I visited my sister! I was on the verge of tears at three in the morning when it was still over 90 degrees! :*(

The Eau de Toilette can be purchased at Lacremebeauty for the sale price of $79.00/3.15 oz.

Comments:
Atreau,
Just when I thought I was over POTL(I swapped away a full POTL Parfum) I had to go and read this. Now I'm wondering if I would love the EDT as the Parfum just seemed so strong on me.

If you loved the parfum but it was too strong for you, I think this would be perfect! It lasted all day on my skin yesterdau where in the winter, it was almost but gone by noon!

I gave up on POTL Parfum because it went Play-Do on me, but now I wonder if I should give the EDT a shot instead!