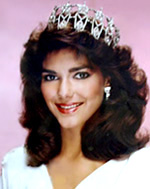 Laura Harring as she is now known was the first and only Miss. Texas USA and subsequently Miss. USA to represent El Paso. She was also the first of five Miss. Texas USA in the mid to late '80's to rein supreme in the Miss. USA pageants system. On the 4th of July in 1985, the local newspaper did a full page "poster" where she was dressed in a patriotic outfit with her tiara and sash as I remember (it's been almost twenty years!)

She has gone on to star in movies such as The Forbidden Dance, where her goal is to dance the lambada to save the rainforest and was a cast member in the unforgettable soap opera "Sunset Beach" where she co-starred with Kelly Hu, who by coincidence was Miss. Teen USA 1985!

She garnered critical acclaim and some fame in 2001 when she starred in Mulholland Dr. but her career has since cooled.

Here's to you Laura, who's done this city proud! After all, not everyone can dance the lambada to save the rainforest!