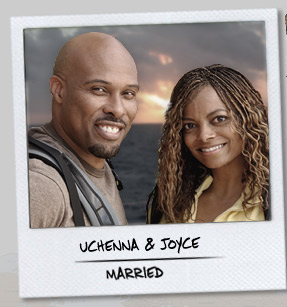 The Amazing Race is one of my favorite shows on tv, twelve pairs of teams travel to places all over the world and have to perform tasks at each stop to determine who is eliminated. I always root for the underdogs, my absolute favorite team was Danny and Oswald from season 2 but this season I really liked Uchenna and Joyce. They had a wonderful spirit to them, were courteous and helpful to the other teams and above all they played fair.

Because they were the last team to arrive at the last pit stop, they had their luggage and money confiscated for the remainder of the race.

In previous episodes they had given money to other players who were in the same situation. Throughout the race, we learned of their fertility problems and how their heart was filled and they were humbled when they visited an orphanage in Africa.

However, through chance they happened to stumble in first place but with a catch! They didn't have enough money to pay the cab driver his fare once they got to the final destination which was a mere sprint from the cab to the finish line.

They could have easily abandoned the cab driver and taken off to win the race and a million dollars as their competitors would have done in a heartbeat! They instead begged people for money to ensure that the cab driver was taken care of before running to the finish line. And they still won!!!!

I hope that I have enough honor and grace in my heart to do the same if ever I were in their shoes. When they won, Uchenna said that they would use the money toward more in-vitro treatments or adoption. It's wonderful to see good people win!

Comments:
A little tear bubbled up in my eye as I watched last night. I so wanted them to win, but I was afraid that Rob and Amber were going to take it with their ruthless scheming. And the way they begged to pay that cab driver! On the one hand, I was terrified that they were going to lose, but on the other hand, I know they'd never leave a guy in the lurch like that. It's funny: There must be some kind of clause against letting contestants say to any locals, "I'm in a contest to win a million dollars, so if you help me and I win, you get a cut."

Also, I want to add that I am fairly sure that if Uchenna and Joyce saw Rob and Amber come driving up while they were in the middle of their panhandling, they would have shouted, "Sir, we'll be right back!" and taken off for the finish line.

Wow, that is sweet.

I was screaming at the TV "Run for the finish, don't let Rob and Amber win!" I do wonder if they can offer part of the cut to others who help them in the race. Then again I heard that they can't contact anyone while on the race so it's probably against the rules as well.