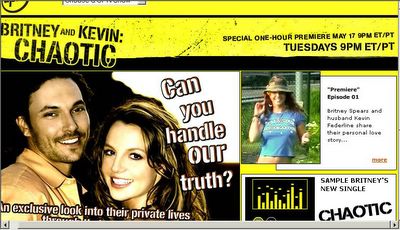 I'd doing a play by play of the show thus far. We see the entire show through Britney Spears' eyes. We are treated to Britney making faces like pig nose to the camera. Later, we see Britney in her hotel asking people about marriage. This is pre-KFed of course as she mentions not really knowing if she wants to get married as she already tried it.

She is in London England and they show her on Total Request Live out there. Later, she asks everyone backstage on her tour what their favorite sexual position is. Then more pig nose faces in the camera.

Comments by my sister "Ugh, her skin is awful!" (I was hoping she wouldn't mention the huge honkin' zits on my forehead - twins no less!) "I love Jessica Simpson compared to this!," "I'm bored, how long is this show?" Mind you, Sar used to be a Britney fan.

Then Kevin comes into the picture and she asks him "How do you feel about marriage and commitment?" and his answer is "Love is love...blah, blah, blah...I tuned out at this point because I swear that he stinks!

Sar said "He's so intellectual, love is love! Ha! Ha! He's just saying that because he wants to get in her pants."

Britney says if she could marry any celebrity it would be Brad Pitt - for once I agree with her. Then how the hell do you go from loving Brad to KFed! I'm a bit afraid to see who I end up marrying! Oh God, please don't let it be Michael Bublé or The Burger King *sobs*

A few days after meeting him she films him and mentions that they can stay in and &*#$ all day. That part was muted out so I'll fill in the blank with four letter words that could fit.

Now Britney's on the treadmill running and talking about how many times she had sex that day to her personal assistant. And then she films Kevin in the shower. He seems quite dirty, so I'm surprised that he's even in the shower! Then again I didn't see any soap, so can we really be sure that he's clean.

Britney mentions again she had sex three times that day this time to her makeup artists. And she's nervous that he's going to watch her show.

Sar said "Ok, I just wasted an hour of my life!"

Previews for next week: Gross, they are making out in front of the camera! Next week will be half an hour long. The bodyguard says "I don't want this punk around her, I'm getting rid of him!"

Now it's back to the German programming as we don't have a UPN station out here, we also don't have WB. Every other channel is in Spanish. I wonder how this show sounds in Spanish!

My sister hijacked the remote to see the Gastineau Girls, she already saw the episode and now she's changed it to Dog, the bounty hunter. I fear this could be worse than Brit and KFed!

Comments:
You lie! Does she really tell her entourage how many times she had sex on camera? That would be tell on camera, not sex on camera. I hope.

I am just curious: why do people care so much about Britney and Kevin? There are real people out there with much more interesting lives? Maybe I am just getting too old to understand this obsession with celebrity, albeit, bad celebrity. And you, Sand, are way more interesting of a person, than Britney, in my opinion, and have more meaningful subjects to talk about!

We tried to watch it too, because we have this thing about Britney. As in, we love(d) her. It was too painful to watch. She was exactly what we expected -- goofy, likable, imperfect, really Southern, not that bright, but essentially naive even though she'd been through so much. It was sad that there she was, about 22 or so, on the road, in a series of hotels, with no one to talk to about love and the meaning of life and companionship but her personal assistant and her gay hairstylist. You see her talking about love and sex and marriage in that goofy faux-jaded-but-really-idealistic-and-curious fashion of a young 20-something, and then you get the feeling that she's emotionally starved and lonely on this tour, and then you hear her jokingly tell TRL that she hasn't had a date in ages so please send the cute guys, thereby reinforcing this idea that she's really alone, and then suddenly the greasiest, grossest playa on earth suddenly shows up with what looks like Mazola corn oil in his hair, and she just basically throws herself at him. And he says, hello, young naive blonde famous rich woman, give me your vagina and your heart. And she does. And then we were so sad we turned off the TV.

I saw a great Flash cartoon of Britney and Kevin in which it is revealed that she's actually carrying a "Cheetus".

Thanks, you've just made me very glad I decided to watch Frontline instead. I really love Britney in an appalled from a distance sort of way, but that sounds just dreadful. You and your sis may have wasted an hour of your lives, but I do thank you for saving an hour of mine. I think it's hilarious they included KFed shower footage, like they're undertaking the massive PR campaign to prove he is capable of grooming himself.

Dude, I loved this play by play.

and TBone, you nearly made me wet my pants. Brilliant description.