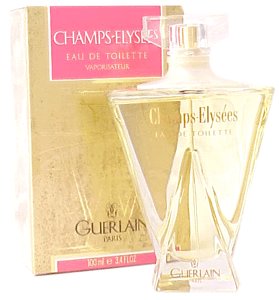 In the past year I have bought, swapped away and swapped for Champs-Elysèes. It's a love/hate relationship I have with this fragrance and it has to do with one thing - mimosa! Mimosa and I aren't such great friends I've come to realize after struggling with both Champs-Elysèes and Champs-Elysèes Too Much.

The notes in Champs-Elysèes are:

The mimosa is loud and proud when I first spray it, thankfully it goes away after a while. It's a fruity floral fragrance that smells more fruity than floral on my skin. It's a fresh rose scent that isn't incredibly strong. I smell hints of peach in here along with light almond.

Once I get past the mimosa, I love this fragrance and it's among my absolute favorites! This smells best in warm weather as an all day fragrance. Maybe in time I'll learn to get along with mimosa but until then I have to use my blow dryer to speed up the process of this fragrance.

Champs-Elysèes retails for $58/1.7 oz. at Sephora but can be purchased for much less at TJMaxx and Sephora.

Comments:
I have settled on the hate side with that one. I cannot stand the mimosa, not at all! It gives me such a headache that I must lie down and weep silently if it comes near me.

I have the same relationship with mimosa. I just can't love it and it sure does gives me a headache, too. I wonder what it is about mimosa that does that--maybe it's sharply green even though it seems to be a soft scent to my nose, being powdery.

Now I wonder if mimosa is powdery because other perfumes haven't been as powdery as Champs-Elysees is to me. BTW, try Acca Kappa Mimosa--this one's nice.

As much as I try to like mimosa it's just too strong and overpowers any fragrance. It's such a relief once it goes away!

Who was it--Queen Noor? Somebody royal likes Mimosa Pour Moi or so I read once, and I bought a decant but never touch it. Same with Champs-Elysees--I wore it out once and found it a bit cloying and haven't worn it since. Yet I say I like mimosa. Weird.