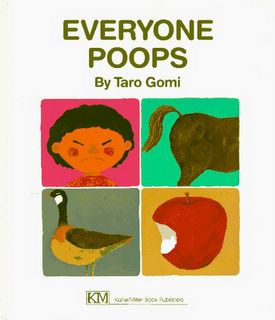 This is the fragrance you give to people you truly hate. If it were to be bottled, I imagine the bottle would be in the shape of a toilet and the box would look like an outhouse. All proceeds of this fragrance should go to the maintence of public restrooms around the world.

The book Everybody Poops is sold at most bookstores and retails for $12.95

ruh-roh. please do not send me this fragrance for what i think about anime. please. because deep down you are a NICE person.

Oh my gawd, I can not believe you actually tried CumCao, but it was your idea in the first place after all. May I presume the blend with Fracas gets sampled tomorrow? Was it called FraCumCao or CumCaoCas?

Everyone Poops and The Gas We Pass are both considered top notch must read pieces of literature around here.

CumCao was by far the worst fragrance experiences I've ever endured! As a child my parents took us to see a ballet and I had to sit next to this lady who was passing gas during the entire performance. During intermission, I tried to get my sister to switch seats with me but she didn't want to so I sat there nearly sobbing during the rest of the performance!

CumCaoCas sounds very interesting but I don't dare venture there! I worry that I have singed enough of my nostrils already!

You are so brave to try your experiments on yourself! Scientific knowledge marches onward thanks to selfless people like you.

CumCao is the *best* scent ever and I hope no one here thinks otherwise!
Sincerely,
CumCao