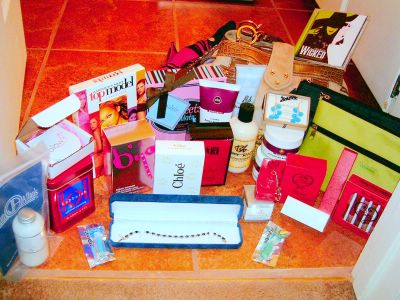 No, I'm not a star and haven't (yet) attended a FiFi award event. So, what happens when my two major hobbies collide? I won Star magazine's FiFi Awards Gift Bag!

It arrived in a huge box and included:

As I was opening the box, my sister ran over and started opening up the purse which had even more stuff in it! I had no idea that I won anything so I was incredibly excited! As a Frag Hag, I'm disappointed that the bag didn't include more fragrances! Then again, there aren't too many people who know what the FiFi's are!

Comments:
You win something very often!! Congratulations--I couldn't be happier that it went to you...although I could be very happy with that bag myself. ;-D

Wait...Bijan? They gave you Bijan? I didn't know it was still being made.

Sand, I don't know how you win so many things! Are you one of those people who enters sweepstakes for a living? I must say, that's quite a haul you got there!

Hopefully I won't forget to log on to the Sampler site this afternoon for a subscription...

Congrats! But have to join you in dismay...where are all the perfumes???

Holy crap, girl. You must reveal your contest-winning secrets. I have only won one thing in my whole life, and that was a copy of Microsoft XP for Office that I got after I dropped my business card in a fishbowl at a life insurance conference that I was writing an article about. That prize was especially hilarious because I have a Mac.

I made a mistake, it was Bijan Style that arrived - not the original. Isn't it cool!

I just enter as many contests as I can and see what I win - I've been very, very lucky!

Did you get into the sampler? They sold out in under two minutes! The first month I tried, I couldn't figure it out and they sold out in eight minutes. Then last time it was four and now under two!

I enter all the contests through
http://www.online-sweepstakes.com/
I've been very lucky!

Isn't it so cool! Man, oh man - I was excited going through the box!