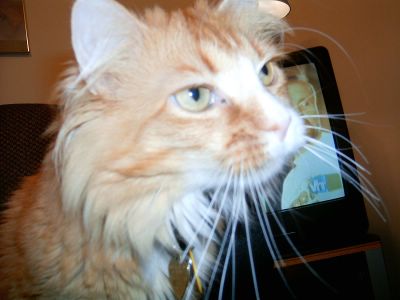 My sister left today with her world famous feline companion Mr. Max. Max was adopted through the Denver Dumb Friends League in September of 2003 at the age of one. As we don't really know how many times he's moved, we guesstimate that this move back to Denver will be his seventh move in a lifetime of two and a half years. Max likes bow ties, martinis and bowler hats. He also talks with an accent, it's a mixture between Morris the cat and David Caruso. He bears a striking resemblance to Puss in Boots in Shrek 2.

He prefers eating bananas and apricots instead of french fries. He only eats the middle of his cat food, preferring to leave behind the "crust." He is attracted to colored straws, pens, office chairs and makeup brushes. Mr. Max likes to attack you when you exit a room by grabbing your foot and biting it or if you move around a lot under your sheets. When Mr. Max wakes up, he likes to sit on your chest and purr but if you try to move him off your chest, he'll bite you. He's a small cat but doesn't like when you point that out.

Max does not like windows that he can't sit in front of, when people pant like dogs, mold, moving and "going to jail" also known as spending time in his Pet Taxi. Max doesn't like Phoenix and as his going away gift to Arizona he'd like the state to adopt his personal slogan "Kiss my AZ!" Later this week, Mr. Max will be back in his old stomping ground of Denver preferring instead the extreme temperatures of the Rocky Mountains.

Mr. Max is a motherfuckingpainintheass when he wants to be! Last night for example when my sister at 4:30 in the morning begged me to take care of him for an hour and a half. In half an hour, he managed to scratch me and draw blood on my arms and one foot, bite me seven times and tear up a paper in two seconds. As a result, he was sentenced to an hour in jail.

Look out Denver, Mr. Max is back in town!

Mr. Max is always up for friends as he makes too many enemies!