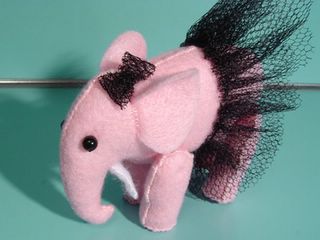 I bought the Pink Elephant Ballerina from the Crafters For Critters site. What should I name her? It was created by I Like It Salty who has loads of uberchic items on her site! Please check out the Cuppycake Bag on her site...adorable!

You too could buy a Pink Elephant Ballerina off her site, sold for the low, low price of $18 which includes shipping!

She also has a Grey Furry Mastadon, Dead Off-White Elephant, Radioactive Elephant! and a White Elephant with Cherry Bow. All elephants are also $18 - Me wants all of them!

To find them on the site go to Shop-> Extras-> and they are under Animals of course!

I woke up early this morning and applied BPAL's Snake Oil. It was Gummybug's rave over this scent that had me rush to test my own imp! Snake Oil is described on their site as:

By far, our most popular scent! Magnetic, mysterious, and exceedingly sexual in nature. A blend of exotic Indonesian oils sugared with vanilla.

It opens up smelling like a caramalized vanilla kinda like dulce de leche but much softer but then it gets smoky and you are hit with a strong burst of cinnamon.

It has cinnamon oil in here. I found out that I have a strong reaction to cinnamon oil the hard way. A few years ago I had taken a long hot shower with Philosophy's Cinnamon Buns Shower Gel and purchased a e-tailer Cinnamon Buns cream. As soon as I stepped out of the shower while my pores were open I applied a ton of the cream all over my skin. A few seconds later, my skin turned beet red and puffed up like crazy. I ran to the sink to rinse it off but my skin remained puffy for at least half an hour. Sure I smelled great but the scent of that lotion was not worth the pain.

Well, Snake Oil is worth the minor discomfort! Yes, my skin gets puffy a bit but it soon goes away and I am left smelling fabulous!

I was going to work out and change my fragrance for the day, but around eleven this morning I felt sick and took a shower in hopes that I would feel better. It's cold today and my body has been shivering all day so I applied this post shower again and took a nap.

I think Snake Oil is a wonderful year round fragrance and can easily be worn from morning to evening. It retails for 12.50/5ml or 19.50/10ml and can be purchased through Black Phoenix Alchemy Lab.

Comments:
I want a pink elephant! That is so adorable. The idea of one, and seeing one 'in the flesh' is awesome.

As for a name...I am clueness, but an idea would be to name her after something that you no longer hide or feel you cannot reveal about yourself.

BTW: your grandmother sounds like an awesome person (see my response to you on my blog.)

hi honey! I love elephants. I will have to check them out when I am 45% awake.

The elephant is even prettier in person! She arrived yesterday nad I am just in love! I still don't have a name picked out yet but I love the suggestion B.