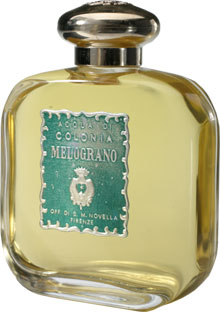 I had first heard of Santa Maria Novella in magazines years ago. I had a serious lemming for their body powders after seeing them listed as a great gift for the holidays. Thanks to Rosie00000, I was able to test so many SMN products. I set my heart on Melograno and purchased the body powder but hadn't opened it until I had the fragrance.

Described as: The fruit of the pomegranate plant, originally from Persia, found depicted in ancient Egyptian tombs and in many of the greatest works of art, symbolizes wealth and abundance. Some scholars believe that the forbidden fruit of biblical and mythological fame was not an apple, but a pomegranate. This fragrance mixes the tart taste of the pomegranate with an insistent, powdery floral undertone and is perfect for day or night.

I applied both post-workout and I couldn't be happier! This is a unisex fragrance that starts off a bit masculine but dries down to a fresh pomegranate juice fragrance with a slight hint of powder. The fragrance to the powder is a lot more green than than the Eau de Cologne to me.

I was going to save this until summer hit but it's already so hot here that I decided summer came early. Anyhow, I decided last night that my second summer fragrance will have honey in it. Honey, honey that'll be the second theme of summer!

I purchased this from Luscious Cargo for $78/3.3 oz. but I noticed it's no longer on the site so please check to see if she has it or will have it later in stock. Aedes also carries the SMN line but you have to call in your order. You can purchase it online at Lafco for $84.00.