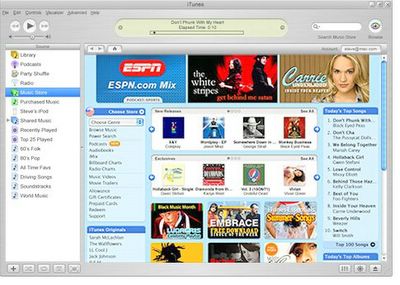 A while back I won some codes for iTunes so I finally downloaded it and checked out the site. I submitted all the codes and now have $15.50 in my account. I feel so powerful now! I've been looking at the site for at least four hours now and still can't decide how to use my power! Listening to all the clips makes it even harder. I really liked the world music section and listened to belly dancing clips for an hour.

I noticed on the site they have Celebrity Playlists which was a lot of fun to look through. Note to KBee - they have Michael Bublé's Playlist. I was thinking of what songs I'd choose if I were asked to come up with a playlist. I narrowed it down to 30 songs and this is what I chose:

(Marie's the Name) His Latest Flame - Elvis Presley My absolute favorite Elvis song in the world, it makes me sad that the masses don't know it!

These Dreams - Heart Growing up, I always wanted a voice like Ann Wilson's and a body like Nancy Wilson's plus the ability to play the guitar.

One Way or Another - Blondie I love Deborah Harry and her voice. All Blondie songs hold a special place in my heart but this one is just a bit brighter.

We All Sleep Alone - Cher It took me forever to decide on which Cher song got picked as she has so many great ones through different decades but this one brings the best memories. At the time she was dating Richie Sambora who wrote this song.

Pleasure, Little Treasure - Depeche Mode Too many songs that I love but this reminds me of dance class freshman year where I was forced to the back of the class, for both my own and the safety of others.

Love to Hate You - Erasure Also, too many songs that I love but this one brings a flood of memories with it.

Hangin' Tough - New Kids on the Block Personally I could easily have thirty NKOTB songs but I chose this one because it shows street cred both for me and them! Word!

You Can't Hurry Love - The Supremes Don't even get me started on how much I love The Supremes and Diana Ross! *sobs* I'll never tire of any of the songs!

People's Revolution; Death of Chou Yuan - The Red Violin(Soundtrack from the Motion Picture) I chose this for so many reasons. I love this movie, I love Joshua Bell. At this particular part of the movie the violin is in China at a time where all western influences are being destroyed. This song starts off cheerful and full of life with the children's chorus singing the song but fades into such sorrow and despair with the violin solo. Breaks my heart every time.

Spice Up Your Life - Spice Girls Yeah baby, it's all about the spice! My favorite Spice Girls song hands down! When I watch Spice World, this part gets played at least ten times!

Reflection - Lea Salonga Mulan is my favorite Disney Movie! Growing up none of the characters in Disney movies looked like me but in the late '90's they came out with Pochahontas and Mulan - which is more me. Love this song for so many reasons and this song rings true now for me more than ever!

Hit - The Sugarcubes For many many reasons, also brings a flood of memories both the absolute highs and incredible lows!

No Ha Parado de Llover - Maná MTV Unplugged Fher's voice and lyrics are what made me fall in love with Maná. My favorite version of this song which makes me cry every time. To choose one song was particularly hard as I love so many. A very close second was Rayando el Sol which brings out so many emotions as well.

We Belong - Pat Benatar As a child I actually believed that I would one day sing like Pat Benetar. I love too many of her songs but this one in particular I'd sing over and over. She once said in an interview that she recorded this song the day she found out she was pregnant with her daughter.

Numb / Encore - Jay-Z & Linkin Park Such a great collaboration! I really love Chester Bennington's voice. Such a beautiful voice but filled with so much pain. He writes what I wish I could say.

If I Had a Hammer - Peter, Paul & Mary My Dad's influence, such a hopeful political song that easily fits into this time period!

War? - System of a Down I love SOAD! Because my Dad forced me to listen to his political songs, I made him listen to mine. He's got a copy of Toxicity in his car that he listens to on occasion. He makes fun of the fact that I listen to this full blast but I can guarantee he does the same when he listens to it!

Dammit - Blink-182 I had such a crush on Mark Hoppus back then! This song puts me at a time where I felt all was right with the world. I had so much hope back them. I hope to regain that back in time.

In Bloom - Nirvana My teen years wouldn't have been as good without Nirvana. I remember seeing them on SNL with my Grandma. Kurt's gone, my Grandma's gone and I'm left alone with my memories.

Coat of Many Colors - Dolly Parton I love Dolly Parton for so many reasons! She's such a great singer and songwriter but still so humble. She gives back to her so much to her community. I wish others who had as much power followed her example.

Need You Tonight - INXS I loved Michael Hutchence so it was hard to pick a particular song but this pulls at my heart a little bit more.

When You Say Nothing at All - Alison Krauss & Union Station She'd make even the worst song sound beautiful. I love too many of their songs but this one I declared as my wedding song, provided I get married. Keith Whitley's original version was good but Alison's voice made this song so much better.

Silent All These Years - Tori Amos The song that introduced me to Tori Amos. I heard it several months before it became popular and remember telling all my friends how much I loved Tori who they thought was a "one hit wonder." Years later she's still going strong! Why don't they ever listen to me?

Take My Breath Away - Berlin I wanted to be Terri Nunn who's eternally cool! Such a beautiful song and voice! A hex on Jessica Simpson for releasing her version of this song!

You Spin Me 'Round (Like a Record) - Dead or Alive I remember my sister and I dancing around my room to this song whenever the video would come out on Mtv. Years later I still dance whenever this song comes on!

Do You Hear the People Sing? - Les Miserables Soundtrack There are too many musicals that I love! I couldn't decide on a movie musical or Broadway musical to include but this one stood out in my mind for many reasons, especially now.

Top of the World - The Carpenters A song that has been a part of me all my life. I even do the hand wave that Karen did when I sing it. Too many songs that I love. Karen died too young because of her demons. I hope to conquer mine before it's too late.

Holding Out for a Hero - Bonnie Tyler This and the Dixie Chick's "I believe in love" are the songs that don't make me feel too bad for being single and alone. Loved this song since I was young and have attempted this and "Total eclipse of the heart" one time too many on karaoke. In my mind I didn't sound too bad, in reality people were drinking more to drown out the sound!

Rise Above - Chuck D & Henry Rollins Oh Henry! Another political song that was made even better by the influence of Chuck D!

Note: I wanted to add a Madonna song but they don't have the majority of her songs on iTunes! That sucks! If I had to choose one song in particular it would be "Dress you up (in my love)" I used to practice that dance over and over. In the 2nd grade I wanted lace bras so I could dress like Madonna. As that was unlikely to happen I instead wore whatever lacy items I could get my hands on to be like Madonna. I'd put lace ribbon around my pony tail and wear my lace gloves and thought I looked totally "Boytoy!"

ahh, these are great! Motown! And I think it is so neat that your Dad shared his political music with you. very cool. xoxoxo

I love this list, though I think both "Are You Down?" and "Funky, Funky Christmas" have more street cred than "Hangin' Tough", which is kind of pseudo all around when you think about the fact that the ripping guitar solo was played on a baseball bat. And, hello? What is on the Bublé playlist? Torture your friends by omitting important information much?

Joe totally lost street cred on "Funky, Funky Christmas!" Hello, how street can you be with a fake British accent talking about Santa burning his butt?

After hearing about Buble on MUA all this time I just recently *finally* saw a commercial with him singing! Now I can identify with the Buble comments, LOL.