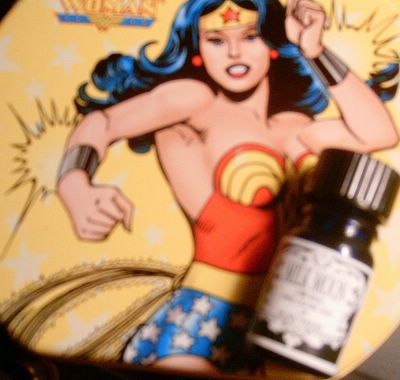 BPAL's Milk Moon which was part of the Lunacy Collection of Black Phoenix Alchemy Lab "BPAL" and it only sold for 24 hours on April 24th of this year.

Milk Moon was described on the site as: May marks the apex of the year’s fertility, expresses the reawakening of the sexuality of the Earth and her inhabitants, and May’s full moon celebrates both the fecundity of the creatures and flora of this world and the vibrancy, rejuvenation and life-affirming energy of Spring. Milk Moon is its warmer, gentler cousin; it is a scent that emulates the closeness of child and mother. In it, cream and warm honey soften our traditional blend of lunar oils.

Like Flower Moon I was unimpressed sniffing this in the bottle to me it smells like a mixture of buttermilk and peppermint oil. On my skin it smells like a bowl of melted butter pecan ice cream minus the pecans a bit like a little drizzle of honey that's been left to boil to create a thicker syrup blended in. Imagine spoonfulll of mint ice cream left to melt in that same bowl. There is a tiny hint of musk in here and is only detectable when I try hard to find it.

The staying power of this scent isn't as great as Flower Moon, it doesn't seem to change after time either. This is a nice fragrance but I think I like Flower Moon a bit more. I can see this as a comfort fragrance to be worn year round from morning to night. I think I'd wear this fragrance more in colder months when I flock more toward gourmand fragrances. I'm wearing The People of The Labyrinths Luctor et Emergo "POTL" EdT today and the scent of the two fragrances go well together so I think I'll further explore layering possibilities.

Milk Moon retailed for $15/5 ml. and like Flower Moon it is more than likely people will have them up for swap on MUA or Ebay.