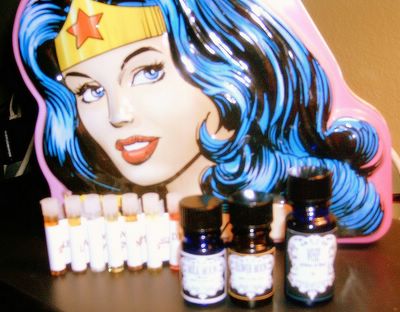 My first BPAL order arrived today, I placed it on April 24th so it took almost two months. I ordered 10 ml. of Whip, a 5 ml. of Milk Moon and a 5 ml. of Flower Moon. The other two were purchased unsniffed as they were part of the Lunacy collection which is only sold for around 24 hours on a certain day of the month. The Moons were $15 each and Whip was $19.50. I was charged $8.50 for packaging and shipping of which $3.85 went to actual postage.

I also placed an order last month for Honey Moon and Strawberry Moon but passed on yesterday's Buck Moon as it sounded too masculine for me. My new year's resolutionwas to not buy any fragrances unsniffed and this was the first time I broke it - so we'll see if it was worth it or if I just bought into the hype!

Comments:
LMAO! WHAT is that Wonder Woman thing in the back of the picture?

It's a tin with a handle. I have three WW tins in my office, that one is my favorite!

What BPAL fragrance would Wonder Woman wear? How about when she's ingognito as Diana? Inquiring minds want to know...

Ooooh, Whip! You've made me so interested in that one! Hope you enjoy your long-awaited order!

help! too many unfamiliar acronyms (spot the perfume novice!)

what is BPAL? and what is MUA?

Skunkor was the coolest He-man character.