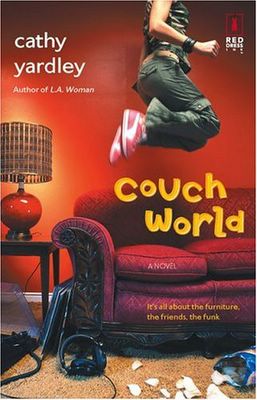 I have a bit of a hangover today, a reading hangover! I spent all night reading Couch World by Cathy Yardley, not because it was particularly riveting but because I couldn't sleep.

Couch World is about a female DJ named PJ who has spent the last two years working her way up being a DJ. Because she doesn't have a home, she relies on others generosity and crashes on their couches. But as she's about to make it big, a reporter's story threatens to destroy everything she's worked toward.

The characters aren't likeable or memorable in this story but the story does arch really well and then it falls incredibly flat. I won this in a contest so I wasn't out any money and I did learn more about the subculture of sleeping on stranger's couches so my time wasn't lost.

Couch Surfing is a site where you can find people who are willing to spare a couch for the night.

Couch World retails for $12.95 but Amazon has it for $9.71 which is the cheapest according to Book A Million's comparison shopper tool.

Comments:
I used to own that couch in the picture! I miss that couch. We used to call it "the whorehouse monstrosity". I loved it though.

I think it's still on the back porch in an apt I used to live in on Hamilton St.