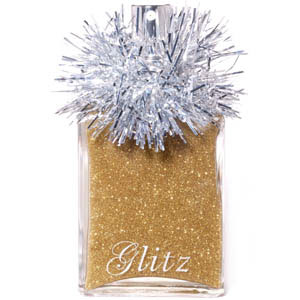 As I move into stage 2 of the cheering up process, I cave to the glitter. Last December at Crabtree and Evelyn, I first noticed Starlights. Starlights was their limited edition Eau de Toilette fragrance, the sales associate also directed me toward the Starlights shower gel and lotion but those had different notes from the Eau de Toilette.

Starlights is described in a press release as: Twinkle Twinkle. Dress your skin in a veil of fragrant, soft sparkle with Starlights Eau De Toilette. The limited edition fragrance is a delicious blend of French vanilla, white chocolate and butter cream topped with seductive notes of white musk. One whiff and he will be salivating.

The lotion in the shower gel and lotion however contained lavender. Starlights smells sweet but like a burnt sort of sweet, think Creme Brulee with a light hint of musk. It's a subtle scent and can be easily masked by something much stronger if necessary as it sounds much better than it smells.

The glitter in the bottle sits on the bottom and you have to shake it before spraying. It's a very fine gold glitter which clings to your skin, you can't really tell that it's there unless the light hits it so I only sprayed it on the skin that was exposed.

The Glitz line is created by Soular Therapy and they make other sprays in other glitter colors which is apparently unscented. Apparently, Starlights wasn't limited to only Crabtree and Evelyn as Maiden American Style was also selling it for $15. It's a kitchy, fun fragrance that is more suitable for evening use that daytime. I don't care for the fragrance much so I'm happy when it fades away after about an hour.

Starlights retailed for $20/2 oz. at Crabtree & Evelyn. Both the Holiday Glitz and other Glitz sprays retail for $15 on up/2 oz. and can be found at: Sesto Senso, Sensia, Facefxonline and Nreagan.

I talked to one of the original creators of Soular Therapy when I was walking a gift tradeshow in LA a year ago- He mentioned that Glitz is one of the only glitter/shimmer sprays that can be used on skin/hair/clothing, but I didn't like the scent very much, as it was quite masculine smelling on me.

I love the way the glitter stays put and isn't sticky but this fragrance doesn't smell that great. I heard the rest of the line is unscented.

I got a bottle of this in swap, of course being the gourmandaholic I am I figured it would be very sweet and vanilla-y. Alas, it's way muskier than I expected, which is not necessarily a bad thing as I like sweet musk scents. I send out decants of it more often than I wear it myself, but it's a fun scent to have around - sparkly and girly.