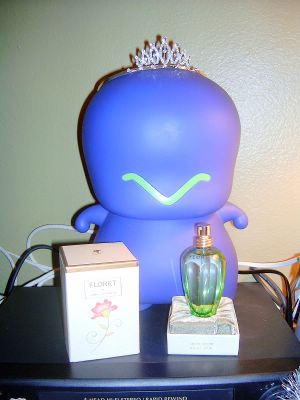 I was only able to find a teeny tiny picture of Floret by Antonia's Flowers which I uploaded and then removed, so I decided to take my own picture of it. I tried to take a picture of the bottle alone but it looked so sad posing alone so it posed with it's friend Ci-Boy wearing my tiara. I first heard of Floret after I had already bought a bottle of Benefit's Maybe Baby as a there were a lot of reviews comparing the two as they are both white floral fragrances with apricot.

Described on the site as Floret, inspired by the rambling sweet peas in her Grandmother's gardens and convinced of the power of the "living flower" Antonia created Floret to recapture the memories of her childhood. The site also mention that this is singer Eve's favorite fragrance.

The notes in Floret are sweet pea, lily of the valley, marigold, apricot, rose and tuberose.

The sweet pea and tuberose are the primary notes in this fragrance followed by the apricot which smells a bit like canned peach juice on me. There is a hint of pear in here as well. It's sweet but not overly sweet (think a drink cocktail). The staying power of this fragrance is incredibly and remains true the entire time.

A beautiful fragrance that I feel is best worn in warmer months, absolutely perfect for summer and wonderfully worn from morning to evening.

Floret retails for $125/2 oz. for the Eau de Parfum and can be purchased through Antonia's Flowers, I bought a new bottle for around $55 on Ebay.

Comments:
I just have to say that I LOVE the picture! Your tiara fits Ci-Boy perfectly :)

It's the tiara! The tiara cinches the whole thing together. Heh.

This picture is fantastic! Love the images.

Love the tiara! And I am a fan of Floret. It's one of the few peachy (apricot) light florals I've found that's really fresh and springy. It reminds me of Petite cherie but I think it's sharper (fresher) without the pear.

Fab picture, I am cracking up!!!

I love that tiara, I wear it when I'm sad or bored. You can't help but smile while wearing it!