I have hit rock bottom! 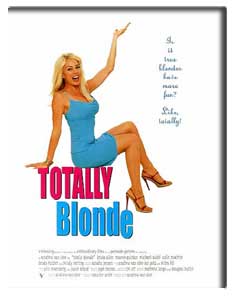 Last night I had a major case of insomnia (as usual) and I started watching movies so I caught Japanese Story with Toni Colette but it had already started an hour before so I continued watching the rest of it which was incredibly sad and I needed to watch a light hearted comedy to counterbalance my mood. Unfortunately, the only movie that was playing was Totally Blonde starring Krista Allen. Having been a huge Days of Our Lives fan I figured it couldn't be that bad.

HA!!! That was an understatement, as I started the movie I knew that this one was going to be a doozy. So, when Krista's Allen's character of Meg Peters goes to a club and Michael Bublé is the singer, why didn't I get a clue that things weren't going to get better from there.

I sat there thinking that it was a one time appearancee by Michael Bublé which for the most part I thought I could stomach. Oh, wrong I was again! Michael Bublé was one of the main characters as Vic Martin!

At one point, Meg Peters imagininging having sex with some other guy and then she imagines having sex with Vic Martin! *I just threw up a little remembering that scene* This was a nightmare come true and the soundtrack primarily made up of Michael Bublé's songs. Even if I wanted to make this stuff up, I couldn't!

Maybe it would have been fun if I took a shot of tequila every time Michael Bublé opened his mouth. This movie was like a demented and twisted publicity vehicle to further Michael Bublé's career. Even Longshot, Lou Pearlman's movie wasn't as bad as this!

I need to watch Cabin Fever a million times to erase the memory of having seen this movie. I have been feeling under-fabulous these days but that still isn't a good enough excuse to have sat through this entire movie! I am doomed, I have hit rock bottom!

You're sick KBee! It was really awful, I bet it'll be your new favorite movie!

That was hilarious. I thought I was bad, watching Tomb Raider followed by the Mummy on TBS on the weekend, but you win the blue ribbon in Goofy-Movie-Watching.