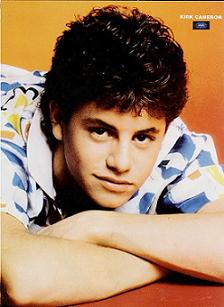 I'm going to hell, guess who told me? Kirk Cameron!

Comments:
Ha! I freaking love doing their little online quiz... I nearly spilt my guts laughing... you so need to read the Television W/out Pity recap of the Growing Pains reunion:

I thought it was painfully hilarious, and that's where I was first introduced to Kirk's Jesus for Profit site.

Okay, so it's possible I may have inadvertantly watched a good portion of that myself... but I admit to nothing as the shame would likely kill me. Remember when Kirk was all sad because he and that girl broke up and he listened to that Tiffany song, "Could Have Been?" Uh, me neither.

This is the most frightening thing I've ever seen. I made it through Kirk asking me how I would know if I'm good *enough* to go to heaven, but I didn't even make it through his way laidback cool thoughts on the first commandment. Make some room in the handbasket, Sand, I'm coming with you.

Have you *seen* his weird-ass tv show? It came on at about 3 am when I was in Illinois, and my SIL (a minister's daughter) and I were laughing hysterically from start to finish! He and some other guy were accosting people in malls and outside clubs, telling them how much Jesus loves them and what they need to do to go to heaven. It was beyond ridiculous!

if kirk is walking this earth, then i think i'd rather be in hell

Nice photo. I didn't know God was so cute. :-) I'm all for personal faith and spirituality, wanting to do better by others and to look within one's heart to see what it means to love our neighbors. When it gets down to "true or false conversion" or putting value judgment on one's faith in trying to get people to join THEIR church and none other, that's when I change my channel.

Oh Sali, that's a great point. I adore my Christian friends who actually try to follow his example, and act with love and kindness first. Because I primarily value those who value love and kindess whatever their religion or lack thereof. What I was always taught growing up was that judgement was up to someone else entirely, not up to any human beings. I just happen to find it odious that he's charging money for he claims he's all about spreading Christ's message.

Sorry, S, didn't mean to hijack your blog messages, and I so apologize if I offend AT ALL!

No offense ever taken, I found it that of all the people who were going to tell me of what to expect in the afterlife I never expected to hear it from Kirk Cameron! LMAO!

Katiedid, I am so with you. When it comes to faith, I believe what's important is "getting it"--the lesson behind the words. Many people from all walks of life do "get it"--religious people shouldn't think they have the monopoly on Love because that in itself is the downfall called pride. :-)

I am catching up on blog posts from the time I was in Florida. Looks like I may be in some trouble. I thought, as a Quaker, I was -- if not good to go, exactly -- at least not formally in the goats section.

Nice to see that I'll have some genuinely decent folks with me. Perhaps Mahatma and I can sharwe a poker.