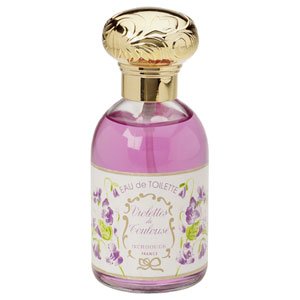 I've never been to France, let alone Toulouse but I'm familiar with it. For years my sister has had pen pals from all over the world and her longest pen pal relationship been with her friend Fabien who lived right outside Toulouse. Several years ago, Fabien came to visit. He brought with him a gift of a Occitan cross pendant and a handkerchief embroidered with violets.

His visit here was certainly interesting, um to leave it as interesting would be an understatement. As I was still in college at the time, he went to campus with me one day. My sister who was also in school at the time couldn't really take time away so we asked him what he wanted to do and he mentioned he wouldn't mind staying at the house while everyone was gone. We figured, he had cable and the internet so how much trouble can a person get into right?

Oh the shit hit the fan that day! Fabien had never mentioned his sexuality but my sister always suspected that he was gay. As both my sister and I have had many gay friends it's never been a problem with us. Fabien had kept referring to his friend who we assumed was his boyfriend but as he never brought up the subject, neither did we.

After the fiasco at dinner, Fabien decided to take an early flight home in the morning. As he and my sister weren't on speaking terms I had to act as the "middle man" between the two parties. It turned out that this was the first time that Fabien had ever been confronted with his sexuality for he had been in the closet this entire time. He'd never told anyone before, not even his friends. That was a really long and tear filled night. We tried to convince him to stay longer in the morning but he decided that it was time to go back home.

I don't know if he ever told his family but he is for the most part out of the closet is now living in England. My sister and him aren't as close as they used to be but still on occasion write to each other.

Now back on topic with the juice, Violettes de Toulouse. I can't find any other additional notes to this pale purple fragrance other than violet. It starts off a bit alcohol heavy on me which dries down fast on me. There are hints of sandalwood and anise on me which seem to take over the fragrance for a while then the violets reappear.

It's a lovely fragrance and I think I prefer this one to Violetta di Parma which starts off too green on me. I wish the staying power were better for this fragrance, perhaps layering would solve this. I think this would be a beautiful year round from dawn to dusk fragrance.

Comments:
Thank you for sharing that story. I can hardly imagine what that visit was like for all of you, but perhaps after that confrontation he is happier admitting to himself what he is. So, it has a happy end, afterall, no?
As for the fragrance, I also prefer it to Violetta di Parma. It is more of a violet to my nose. I wear it often whenever I have to study, as it does not seem to interfere with work.

I think it's always better to live your life as open as possible than to live a lie. It was just awful at that time but has turned into a comical story.

Interesting story! I hope Fabien is happier now. :)
I am on a violet kick right now and this one sounds really good-violets, anise, sandalwood? Very unique and worth trying.