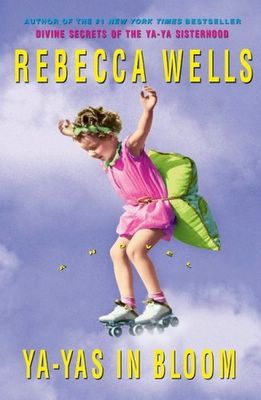 I've never read any of the other Ya Ya books by Rebecca Wells but I did see the Divine Secrets of the Ya-Ya Sisterhood movie starring Sandra Bullock and Ellen Burstyn so I wasn't completly lost when I read Ya-Yas In Bloom.

The story is told from different narrators from how the Ya-Yas came to meet to the memories of the Petites Ya-Yas (their offspring) growing up finally ending with the next generation of Très Petites (the Grandchildren).

The book seems rushed at the end with a strange subplot that occurs. It wasn't a bad book in all, but that last part really bummed me out!

This part made me smile however:

All the other Ya-Yas chimed in. Mind you, these women had been sipping bourbon or martinis for hours. But they were still sober enough for the show to go on. I could smell liquor on their breaths, mingled with their Chanel, My Sin, Joy, and Mama's signature scent from Hovet Parfum, along with cigarette smoke. For years I thought of that mixture as the essential aroma of womanhood.

*Note: I believe there was a misprint with Hovet Parfum and think that the writer was referring to Hové Parfumeur, then again I could be wrong.*

Comments:
I must be the only person on the planet who hated the original book, which I was forced to read for a book club. Blech.

I think you're right about the Hove, because that's how I might spell it if I'd only ever heard the name rather than having read what it's spelled like first.

That is an interesting list, though, but definitely accurate for the times. Too bad My Sin has been left in the dust with the times.

I did not read the original book, but am interested in these beautiful and airy visuals you have posted.

Thanks for the great information, S!

I've never tried any of the Hove fragrances but I know CK talks a lot about one in particular. That one I need to test someday!