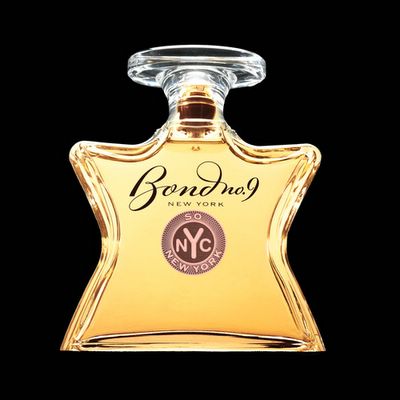 When I declared that I was going to test Bond No. 9's So New York I was warned by my friend Barbara the Pirate who described this fragrance as "sooo very New York City in the middle of a summer garbage strike."

So New York is described on Saks.com as uptown or downtown, New Yorkers have always loved chocolate. This scent is ideal for the chocoholic who loves her rich dessert to have bite and spice. Bergamot and plum are blended with bittersweet espresso and seductive warm milk accord. Patchouli, lily of the valley, peony, musk and precious wood notes add flavor.

Sounds like it would be interesting! It opens up with chocolate, coffee and pineapple - where does this pineapple come from? Perhaps they were trying to make something similar to Thierry Mugler's Angel. I don't know where the pineapple comes from but it's bad! I mean awful! It starts to dry down and the patchouli takes some of the fragrance. Sometimes patchouli kills a fragrance but this is a nice patchouli and reminds me a lot of Viktor and Rolf's Flowerbomb.

For those who can wear this fragrance it would probably be best worn in colder weather as an all day fragrance for some and an evening fragrance for most as some people over apply patchouli heavy fragrances during the day.

Comments:
you are so diplomatic! but it still sounds awful! fruit, fruit, fruit AND chocolate. ick. but thanks for warning us! xoxoxo

Standing up for SNY! I like this edgy fragrance. I get florals, a bit of plum, chocolate and coffee. No pineapple or other fruits. The drydown is not heavily patchouli a la Flowerbomb. It is sophisticated and complex. It is best in winter although I've worn it in warm weather too. Do give it another try when the temperatures cool.

Icky! I just *wish* this had smelled like my beloved F-bomb on me! But alas, it smelled like sharp, perfumey flowers on my skin and not at all like anything I could possibly wear... I guess I should try the other Bond frags and not hold my dashed hopes for this one againt them, huh?