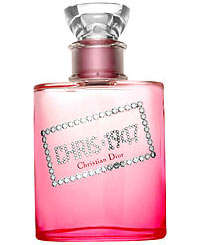 I picked this up last week while shopping at Marshalls, it wasn't sold in local stores when it was released but I did happen to nab a sample a while back and had once been on my long list of possible purchases if I ever ran across it at a discount.

Chris 1947 (which is the year of the Dior’s first couture collection,) by Christian Dior was released in 2003 as a limited edition and was bottled in the traditional Dior bottle which was produced in pink for this fragrance.

Chris 1947 was designed especially for women with a rock n roll attitude, who's always optimistic about life, this sparkling floral is a sexy combination of fresh, exotic floral notes and spicy fruits soothed with driftwood, musk and sweet Amyris wood.

Like the majority of fragrances on the market this is a run of the mill fruity floral fragrance so it doesn't score any points on originality. The sweet pea is oddly the first note that appears on my skin, then the freesia and cranberry that's slightly musky. Today was probably the most humid day this summer so it was a perfect day to wear this fragrance. This is a warm weather fragrance which is more of a daytime scent. The staying power is lousy on this fragrance and couldn't smell much of it after two hours, for longer application I'd spray my clothes rather than my skin. In all it's still a nice fragrance but probably one I wouldn't purchase again.

Update: I layered this with Bella Luccè Japanese Yuzu lotion and sprayed more of the fragrance (six sprays) and the it smelled even better and much fruitier! I ended up liking this fragrance even more and the lasting power was much better this time around! Yay!

Comments:
hi A, er S, er Ombligo ... I can't do fruit, but wanted to belatedly thank you for the wonderful Nanadebary Bronze review of days past ... it sounds wonderful!
xoxoxo

How funny, I picked up a different LE Dior, I Love Dior, because it was all of fourteen bucks at Perfumania. It too was perfectly pleasant for the price, but nothing exceptional.

I think Dior spins out too much effort with too little payoff for their LEs generally. At the moment, I can't recall a single Dior LE I've missed from recent history.