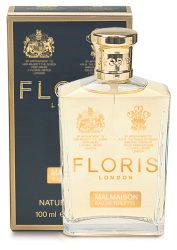 I wanted to wear a carnation fragrance today and settled on Floris' Malmaison to see if I liked it as much as I remembered. It's described on the site as rich, theatrical and noisy.

Created from the rare Malmaison carnation. The malmaison was Oscar Wilde's choice of buttonhole flower, which he would dye green daily. An unusual floral fragrance, with a hint of spicy cloves, it is warm and sensuous. Its appeal lies in the duality of its unconventional and reassuring nature, and those with an artistic or theatrical streak tend to fall under its spell.

A beautiful spicy carnation that is has subtle powder undertones. It isn't woody on me at all. I really like this fragrance but if I were to have to choose just one carnation fragrance I'd probably go with Comme des Garcon's Carnation which has a lot more bite. This however is a much more flexible carnation that can be worn as an all day fragrance year round where CdG's may be too heavy in warmer months for some. The staying power is fair as I do have to reapply after a few hours because it does fade away on me.

Luscious Cargo sells Malmaison for $68/3.4 oz. year round but for the best bargain on this fragrance order it direct from Floris which has it on sale until July 16th for $30/3.4 oz.

Comments:
I love this one ... and interesting about Wilde and his green buttonhole flower. xoxoxo

I love those Floris half price sales once a year (are there more?). I especially love their lotions and bath oils. Mmm...