Harry Potter and the Half-Blood Prince

Harry Potter and the Half-Blood Prince 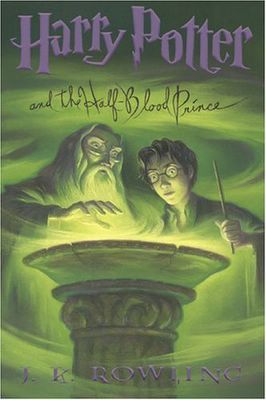 I'd hate to ruin the book for anyone so I'm going to put my comments on Harry Potter and the Half-Blood Prince in the comments so please if you haven't read the book, don't click on comments!

Harry Potter and the Half-Blood Prince retails for $29.99 at most bookstores but it can be purchased for much less while it's still on the New York Times best seller list.

Comments:
I didn't get this book on the release date because my thrifty ass decided to not pay an additional amount to pay booksamillion.com where I have a discount card, the upgraded shipping fee.

In retrospect, I should have just bought it the day it was released at midnight! Oh well! You live, you learn!

Anyhow, I had really high expectations after Harry Potter and Order of the Phoenix which really disappointed me.

I heard about the series before it ever came to the states and couldn't wait to read the firt book. Book 5 was the first book that I read after the movies came out so I could see the actors more as the characters than my own imagination which was far better in my opinion.

I was incredibly disappointed that J.K. Rowling gave away a huge chunk of the storyline so early in the book. I also expected Neville Longbottom to play a bigger role in this book especially after the last book.

I thought J.K. Rowling took the easy way out of this book, having Snape be the Half-Blood Prince and him killing Dumbledore. Although after a while I was convinced that Dumbledore was in on the whole thing and Snape is a double agent - ask me again tomorrow and I will no doubt have changed my mind about that again.

I just have an issue with the death eaters believing that Snape is one of then the entire time before killing Dumbledore.

And I felt that Dumbledore was a putz, he should have just told Harry the truth this whole time - how much longer can we drag on the story?

I'm glad that they are finally setting the groundwork for the final book and hope that it exceeds my expectations!

True to tradition we will see a new Defense Against The Dark Arts Professor in the next book - can't wait to see who's chosen next!

One last thing to add, I'd like to get my hands on a bottle of Felix Felicis!

Read it in two days and loved it! I wish it would not be such a long wait until the next book :-(