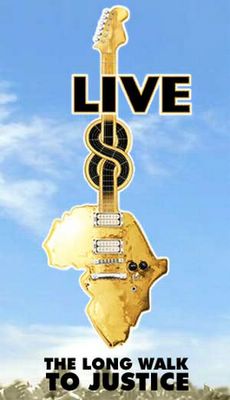 I saw most of the Live 8 concert yesterday on MTV. I remember seeing Live Aid as a kid and dancing around to Madonna singing "Love Makes The World Go Round."

Where Live Aid twenty years ago asked for monetary donations Live 8 this year asked for people's voices. In the hope increase awareness and that people would be angry enough about the situation on Africa that we will demand that the leaders who are meeting for the G8 Summit will cancel debt, increase aid to developing countries and promote fair trade.

In London, Bob Geldof the singer who organized both Live Aid and Live8 introduced the audience to Birhan Woldu, a beautiful young woman who's now an agriculture student. Twenty years before, she was a child starving to death and he said to the audience "See this little girl? She had 10 minutes to live 20 years ago... She is here tonight... Don't let them tell us it does not work."

Here in the states the Live 8 concert was held in Philadelphia where they audiences were treated to a free concert featuring Bon Jovi, Destiny's Child, Linkin Park and Jay-Z among others. Will Smith had everyone in the audience snap their fingers ever three seconds to symbolize how often a person dies in Africa. It sounded like a great idea right, increase awareness and demand change?

Yet, after the concert they showed the MTV and VH1 veejays talking about how successful the concerts were while surrounded by all the trash the audience left behind in Philadelphia.

So, we're expected to believe that these people who were treated to a free concert, that had been shown videos about the situation in Africa during the six hours the concert went on are supposed to go home and demand change?

They can't even remember to pick up after themselves! 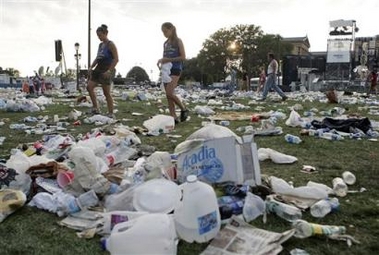 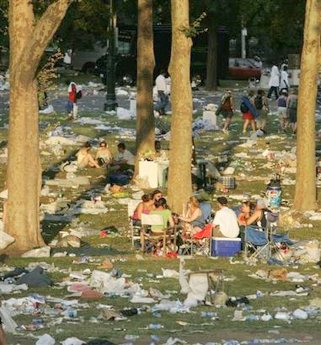 Comments:
I have to say that I agree with your assessment, unfortunate as it is. The "current" generation has repeatedly demonstrated their apathy, most notably in the last election. I'm interested to see what sort of respone there will be online, and whether it will at all affect the G8 summit.

I understand the need to raise awareness of the problems in the world, but I can't stand the "concert" method. It pains me to think about the insane amounts of money to organize and implement events like it that could be applied directly to the problems they're supposed to be addressing.

This is a shame.
Was this only in philly?

Why are these "entertainers" not forking over some of their cash to help out? I mean honestly-they are worth millions of dollars especially that Tiger Woods guy and some of those totally over paid basketball players! At least Oprah is doing her part. I got the feeling that many people just went for the free concert part, went home, and forgot all about "the cause ):