Three prizes in a week! 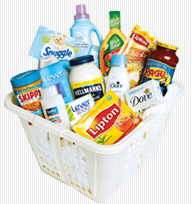 This week when the second basket arrived, I had hoped that they took my advice and wrapped the Snuggle liquid fabric softener in plastic but as I lifted the box I could smell the familiar scent of Snuggle! Opened it up and yep, it had also exploded! Again, all over the box of Snuggle fabric softener sheets, the sheets however survived this time. The only casualty this time around was the Lipton Rice Kit which was saturated with Snuggle.

I also three shades of Orly nail polish from the Play Summer 2005 Color Collection: Fore!, Total Knockout and 15 Love. Fore is a peachy orange color, Total Knockout is a reddish fuschia color and 15 Love is a bright hot pink color.

And today I received Nick Frost's Danger! 50,000 Volts which says it's a British comedy television series where survival is not assured and Danger is always just around the next corner!

I love British comedy, with Coupling being my favorite show! I don't think it's back for a 5th season which leaves me quite sad but things were never quite the same once Jeff left the show!

Comments:
oooh, do you mean the british version of 'coupling'? i did hear that there were going to syndicate it and have a US version...

i used to enjoy it in an easy-watching-on-a-friday-night sort of a way!