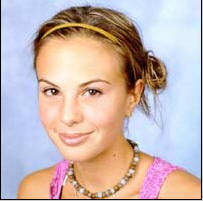 I used to adore Elisabeth Hasselbeck when she was on Survivor: The Australian Outback she seemed so genuine and nice and I hoped that she would win.

She didn't, but I was happy when it was announced that she was the host of The Look For Less and watched it as often as I could.

After a while, she started to annoy me and she annoyed me even more when she was chosen to be a co-host on The View. I don't know if people just become bitchy while on that show or if their true colors come through after time but I can't stand any of the hosts on The View. None of them seem genuine or nice at all and I want to kick all their asses!

I'm really happy that there is a new host on The Look For Less, it's model Yoanna House who was the winner of America's Next Top Model 2. I never saw that show but she seems really nice. I really hope she is sincerely nice and genuine because nothing pisses me off more than people who pretend to be and aren't!

Comments:
ROFL!!! That pic of the malnourished, thinning hair Elizabeth cracks me up! I loved her on Survivor. I loved her friendship with Kentucky Joe. It truly touched my heart. I was so pissed when someone would make an off color comment about their friendship in interviews. I think he truly cared for her like a daughter

I agree with you about being annoyed with her now. She is now a mother with those HUGE boobs that say "I am nursing, I am earth mother, I am superior to you". That annoys me with most new mothers--not just Elizabeth.
I never watch that show because I cannot stand Star Jones-Reynolds. I do love when Mario Cantone is on there though.
Does Elizabeth's chubby husband still play pro ball? He seems like a TOTAL bore.

As you know, I am seldomly nice. But I do think it's worth my while (and everyone's) to be kind to others - does that count?

That's why I can't stand the The View - they're just mean and indecent towards each other and their guests. I don't know why they call it The View - that implies they have an outlook, whereas all I have usually seen is a group of women all busy trying to shout each other down. Maybe it's changed - I hardly ever watch it, and when I do its only in wee bits and portions. That's quite enough for me.

I remember Yoanna! She's the one who got the Sephora catalog cover, right? Or am I mixing her up with someone else?

Ugh The View is so catty and the way they talk bad about people yet they kiss their asses when they are on the show! I hate it!

Yes, Yoanna was the one who was on the Sephora cover, she's so pretty! :D