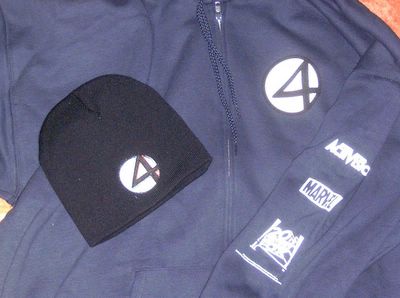 My day wasn't a total suckfest as a win came in! I won a Fantastic Four Jacket/Beanie Set. Approximate retail value $45.00. $45 my ass, who decides what the retail price of these things? This was a 5th prize win, the other prizes in this contest were really awesome!

I totally need a snowboard! Why doesn't society realize this, why haven't snowboard companies sent me an unlimited supply of snowboards? Nevermind that I've never gone snowboarding in my life but I've never surfed and I have a surfboard! Someone should create a show for me where people dare me to do different things like go surfing, snowboarding, swim with sharks, etc... And I have to do it because it's my contribution to society or something like that! I'm onto something, I just don't know what it is!