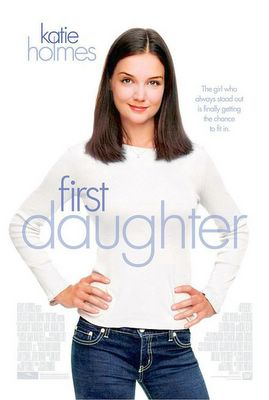 I wasted two hours this morning watching First Daughter. It really wasn't my fault as I wasn't feeling good, hadn't slept and had seen every other movie on cable already. Plus, I have a renewed crush in Marc Blucas of Buffy fame as I saw I Capture the Castle the other day which I really liked.

If you've seen Chasing Liberty, this is the same premise. the daughter of the American President wants a normal life, meets a boy who isn't what he appears to be.

Winner: Mandy Moore who's a great singer, seems all around nice and she would never date Tom Cruise! It's a shame that she and Andy Roddick broke up, they were an adorable couple!

Winner: Marc Blucas, although if I had to choose my favorite Buffy beau it would be David Boreanaz.

Winner: Mark Harmon! Ah sure, you're thinking how can he beat out Batman/Mr. Mom but Mark Harmon actually saved people!!

If you've seen Chasing Liberty then skip this one! Tom Cruise had mentioned in several interviews that he was captivated by Katie Holmes' talent as an actress. Clearly, he didn't see this movie because my portrayal of a maid in my freshman introduction to theater final took more effort than this movie did!

Comments:
Oh my gosh, I watched that last night too! I found it funny that it basically had the same story line. Nuts!

I have another post up today on how New York magazine had katie and tom in straight jackets on their cover. I think it was with absolute disrespect for those with mental illness.

Hope you are doing well, S.

I liked Mandy and Andy, but I like Mandy and Zach Braff even more! I think Mandy Moore is just adorable - have you seen her on Entourage?

I was forced to watch this on a plane! Even with the sound off, it was execrable.

I feel the need to tell you all that JEREMY PIVEN is in Chasing Liberty.
I love him!

I love Mandy moore, she seems really genuine! I totally love her in Entourage!