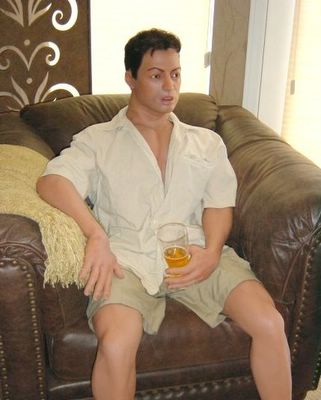 Last night I was watching a series of Nip/Tuck episodes and the episode where Kimber has a Real Doll (This is a site that has non-human nudity which may offend some.) in her likeness. I had first heard of these dolls through HBO's Real Sex series where they've showed both the male and female versions of the dolls.

Anyhow, I've mentioned in the past that I think the male version of the doll looks like Gary Sinise. So, after the episode finished I changed the channel and saw that Hunter was on. I used to love that show so of course I have to watch it and guess who's on this episode of Hunter?

Gary Sinise! He played a British serial killer who was known as the "Lullaby Killer" in London and he came over to the states and killed British prostitutes here. He was a Lord who was also a photographer and he'd take pictures of the prostitutes, then snap their necks and put in their hands a music box that played Brahms' lullaby.

Updated: To mention that that picture isn't my own personal picture but taken from the Real Dolls site. I do not nor have I ever owned a Gary Sinise looking Real Doll or any other type of Real Doll.

Just wanted to clarify as I didn't want people to think that I'm freaky like that. No offense to those who are freaky like that or people who like Gary Sinise fans who know in their hearts that Gary Sinise was indeed the model for the male Real Doll. Well, perhaps not below the belt - maybe they used a different model there. But maybe not!

I can honestly say that I have never seen Gary Sinise in the buff so I can't testify to the size of his um...package. I can however talk about Brad Pitt and his little or not so little B, R, A, D. (Those who are offended by non-sexual nudity might be offended by clicking on those links or maybe they won't!)

So yeah, I am with T - kinda scary to me, too. What is he supposed to be drinking there. I think it's supposed to be pilsner or champagne or something, but it's so yellow it kind of looks like pee.

Hunter, huh? There were so many movie folks who got a start in TV. I'm not a Hunter watcher, but I do like Matlock, and there have been so many famous faces I've spotted there, too.

OMG, that Gary Sinise look-alike Real Doll is the freakiest thing I have ever seen! And I don't know what possessed me to click on all four of those letters. I have no idea.

There is nothing right about that doll. I am SKEERED!