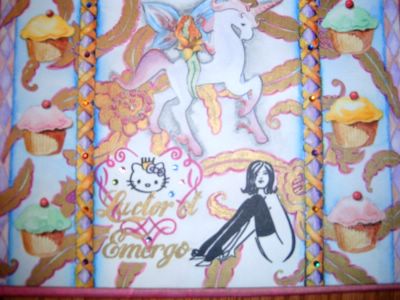 Being the worst photographer in the world means that I can't do this painting justice but it certainly doesn't diminish my love for it! Painted especially for moi by the the smartest and most gifted Pirate ever Ms. Barbatia!!! I can't stop screaming, it's so amazing in person!

The hardest year for me was the 3rd grade, my teacher hated me for some reason. She saw me as a troublemaker and had every intention on making my life hell! My Mom wouldn't accept me getting anything lower than a B, so I'd pull out all the C's, D's and F's from the stack of work we did in school which had to be taken home to be signed and then I'd staple the entire stack back together again. Staying after school and crying were a daily occurrence during 3rd grade! Anyhow, I barely made it through the third grade because of that teacher. In the fourth grade I made honor roll the entire year - from a failure to a comeback kid?

During that school year, the author Marc Brown of the Arthur series came to my school for an assembly and afterward we were given to the opportunity to purchase his books in which he would autograph. I adored the Arthur series and begged my Mom to send me with some money so that I could get an autographed book and she did. Well, that afternoon as everyone got ready to go to the assembly my teacher declared that Jason (a fellow "troublemaker") and I had not colored The Lady Of Spain (We had been learning about different countries that week and had to color pages of different people wearing the clothes of their countries.) She lied to keep us from going to that assembly as nobody in the class had to color that specific sheet and I went home without an autographed book.

Later that school year we had a fundraiser and a booklet of items to order things from and in that booklet was a plush unicorn for $15. $15 may not seem like a lot now, but for a kid it's so much money! I loved this plush unicorn and really wanted it. I somehow saved up enough to buy it. Several weeks later when the order came in I didn't get a unicorn but a poster with a monkey on it. Turns out I had ordered the wrong product! It was a minor screw up but at the time, it was the biggest thing I had ever screwed up! I remember coming home devastated, my Grandmother was visiting at the time and I remember her trying to console me as I sobbed. She told me that she'd pay for that monkey poster and everything would be okay. My Grandma always made everything seem okay.

I never got my plush unicorn and hadn't thought about that memory in years but I was overcome with emotion yesterday. I really miss my Grandmother who died three years ago but know that in the end, somehow everything will be okay!

A huge thank you to Barbara, it's so beautiful and something I will always treasure!

Comments:
Oh Sand! I'm so angry with your third grade teacher right now. SO ANGRY. I almost wish you would write to her and let her know that you still remember what she did. That's terrible!

And the Unicorn! Oh Sand! (Barbatia rocks! Funny how things like that can be healed :) )

I love it. And I would also like to damage the third grade teacher-who-should-never-have-been-in-a-classroom. xoxoxoxo

Hooray!!!
That is so awesome! The Mighty Pirate is a talented one indeed!
Is it a bag or a poster or what?

Tarnation on your 3rd grade teacher.

As for the third grade teacher....

The painting is fabulous!
What a good present!

Your teacher was just... ugh. What a friggin meanie. Let's just say for arguement's sake that you really didn't do some assignment: the punishment STILL doesn't fit. I'm with J, I kind of wish you'd write her a letter to let her know.

And OH! the painting - that's one awesome pirate painter. It's the cupcakes that really make it work for me. It looks like a perfect girly princess triptych.

There aren't enough hugs in the world to make up for a mean-spirited teacher like the one you had, but I'd sure like to make a start! And can I say that I wish I was as clever as you about getting signatures?!? My sister and I just forged the sigs and lied to our parents... I hope you had teachers later in life to make up for that pathetic excuse for one you had in 3rd grade!

And it goes without saying (or should!) that Cap'n Barbatia is a wonderful woman and amazing artist. I'm so happy for you to have received such an extraordinary gift!

It's never to late to have a happy childhood, Sand, and you seem to be a person who knows that. Good for you! I want to buy you a stuffed unicorn right now! :-)

As for your teacher, what the hell is a bitch like that doing teaching kids?

Wow, I am so glad to log in to see Barbatia's art. She's really awesome. And yeah, it is so you!