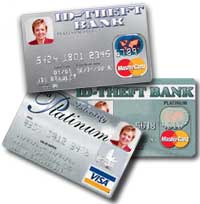 So I'm going through my mail today and I open up this letter from Chase and it states: After careful consideration, we have decided to close the above-notes account for the following principal reasons:

I thought it was a scam letter as I don't have a Chase credit card until I checked my credit cards and sure enough the number is one of my Bank One credit cards. I checked my account online and there isn't a balance on it so I figured there has to be some type of mistake. I then called Bank One and they told me that they made the decision to close my account based on the information on my credit report.

A few months ago, I received an e-mail stating that my American Express account was frozen because I hadn't paid my balance. I hadn't used that card and knew that there was no balance on the account as I pay off the balance in full every month on anything I charge. They told me that my account was somehow combined with another account so everything was fixed, it was a case of mistaken identity so I didn't worry about it.

Well, now I'm worried! I called to put a fraud statement on my credit report. I was able to access one of my credit reports online and there doesn't appear to be anything wrong with it but I have to get all the credit reports and do futher research on what's going on! Bank One told me that my account is now closed so there isn't anything I can do there.

I feel so angry and violated right now because now I have to clear my name and credit report!

I'm sorry to hear this Sand. I don't know how to fix it by Anjali's suggestions sound good.
xoxo

god, identity fraud is such a nightmare

i was the victim four years ago and thought i had cleared it all up (spent HOURS on the phone) but then i tried to open an account last month, was refused and found out there is still one remaining fraudulent account

i've had it with the modern world this week!

I feel so violated and made several phone calls yesterday. I need to wait to get my credit report and see if there is anything there that is suspicious. This really sucks!

I was the victim of identity left a few years ago and it stills comes up every once in a while. I'd like to get my hands on the thieve. My boss actually hired a private detective to hunt down the woman who stole his wife's identity. They caught her and she went to prison!