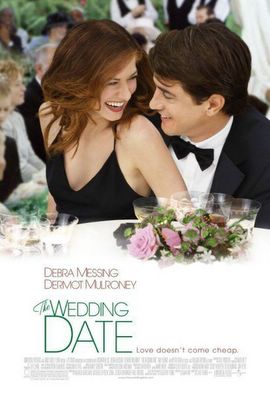 I saw The Wedding Date tonight, I had a feeling that I had already seen it as the story is very similar to Picture Perfect. Girl hires boy to pretend to be her boyfriend and they end up falling in love.

The good thing about this movie is Dermot Mulroney! He's so sexy and underrated! I also loved the way they did shot the love scenes and the scenery was beautiful. Other good things about this movie were stars of two of my favorite British series Jeremy Sheffield from Murder in Suburbia and Jack Davenport from Coupling.

The bad thing about this movie was everything else! I've been a fan of Debra Messing since she was on Ned and Stacey and I loved the first two seasons of Will and Grace but stopped watching after that, although I do sometimes catch it from time to time. Anyhow, she's adorable but the storyline really sucked!

Things got bad with the soundtrack which started entering suckville when not one, not two but THREE Michael Bublé songs appear in this movie! Does the universe hate me that much?

Seriously, there is never an excuse to add a Bublé song in any movie and to make matters worse it, they used his version of "Sway." If he really loved and honored that song he never would have covered it! But he doesn't and now the entire world has to suffer!

Come on, why don't they use the Dean Martin version?!?! I think there should be a scrolling Public Service Announcement before any movie includes a Bublé song!

Comments:
I've been considering this movie, so tell me - worth watching or no? Do the positives outweigh the negatives? Bublé is a big drawback, and I get creeped out looking at Debra Messing's freakishly bony chest.

But I looooove Dermot Mulroney, and have been a Jack Davenport (and Coupling) fan for a couple years now. I was pissed when I found out that they passed him over for Arthur Dent in Hitchhiker's Guide b/c he's "too goodlooking" - he'd have been BRILLIANT! But that's neither here nor there. What's the final verdict?

The National Keeter Association has issued a severe BUBLE WARNING for SAND COUNTY in effect until...

I'd only watch it if you were a die hard fan of one of the stars (I'm talking die hard here - like you've seen every single movie they've ever been in!)

This is more the type of movie you see when it comes on HBO, don't rush out to rent it but if it happens to be on tv and you happen to catch it, you may like it.

In all honesty, it kinda sucked before being Bubléd!

I think they cancelled Coupling as it didn't come on this year! *sobs* It just wasn't as funny when Jeff left!

ITA! Jeff was so cute and strange and hilarious! They tried to fill the void with Oliver, but he wasn't as good.