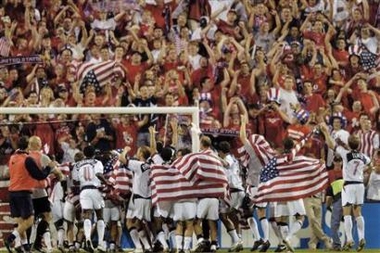 Players from the U.S. soccer team celebrate their 2-0 win over Mexico during their 2006 World Cup qualifying game with fans at the Crew Stadium in Columbus, Ohio, September 3, 2005. (John Sommers II/Reuters)

It was the fifth straight time the Americans have made it to the sport's quadrennial showcase and the earliest they've ever managed it when they've had to qualify, going through with three matches to spare in the 10-match final round. It was also the first time since 1934 that the US was the first team out of the North/Central American and Caribbean region to make it to the Cup.

We're in the world cup baby! Bruce Arena and the boys are ready to kick some ass! It felt good the cheer after such an awful week. It felt good to be filled with hope!