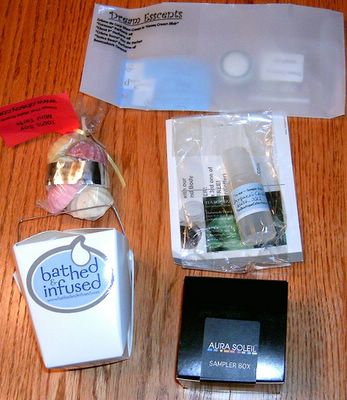 I just received my June Lemming Central Box today. That's right I said June! This order was placed on February 5, 2005 which makes the turn around rate on BPAL's orders (two months) seem tame!

I had previously ordered and received the April Lemming Central Box which actually arrived in April and was for the most part pleased with it. There were products from ten e-tailers in that box compared to this box which had five. 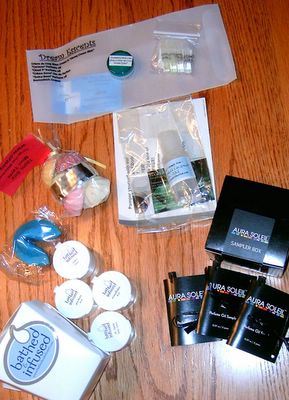 I'm a procrastinator myself so I can excuse for the most part a delay in shipping but when money is involved and both business and customers pay for products to be delivered, there is no excuse for such a long delay! These were supposed to have been delivered in June and it's now September! I also heard that some people never received their April Lemming Central Sampler Boxes.

I find it rather convenient that the proprietor is now selling "extra" boxes on the site. Instead of there being extra boxes, they should have distributed those "extra" samples in the boxes that were sold and promised so long ago.

Comments:
Dude - now I feel even MORE ripped off. Your sampler box totally kicked mine's ass! WTF?!? Mine (the June box hahaha) came today too. I had forgotten I even ordered the damn thing!

That is ALL that was in there. And Avon? Come on!!! I'm definitely not ordering from them again. Grrr.

Dude, I think I got lucky with my box as it has a lot of fragrance samples but it's still NO COMPARISON to the April one.

I ordered this in February, it was promised in June and didn't come until September? Come on!

And then for them to sell "Extra Boxes!" That's a slap in the face!

From now on I'm going to just buy sampler boxes from The Sampler! I've received some bath and body products in previous ones and Aura Soleil has also participated in that one.

God, the worst part is that even this box o' goodies looks so cool I'd like to order... except not, given what you said has happened. Grrrr. What a shame - that looks so fun. But never receiving it, or getting beat up Avon samples does NOT looks so fun at all.