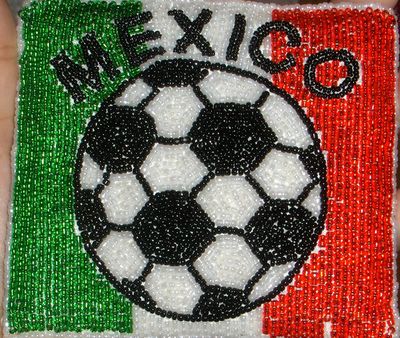 My sister called me yesterday and told me that she bought these little coin purses yesterday and she said "I bought you one but you might not want it."

I asked her why and she said that it had the colors of the Mexican, Mexico written on it and a there was a soccer ball on it. I cut her off and told her I didn't want it!

It has nothing to do with politics but has everything to do with soccer! Mexico is USA's biggest rival when it comes to soccer and I'm still celebrating the fact that we kicked their ass on Saturday and are headed towards the World Cup. In your face Mexico!

I'm grateful that Mexico has come into our country to help with Hurricane Katrina relief efforts. Yay Mexico! We're still going to kick your ass in soccer however!

Comments:
ROFL at your last line :)

Damn skippy! Latina is one of the very few ethnicities I'm *not*, but regardless, I'm determined to build US support for soccer! One of these days it'll get the recognition it deserves.

BTW, Sand - have you seen the new commercials that start w/the Jim Bruer stand-up bit about soccer being boring, and then show all the ways soccer players can use their skills in any popular sport? Killer!!!

What's funny is that I *totally* look Latina! That, or Native American. I've been mistaken for both my entire life. It's the Greek in me, and the Russian (Greek coloring, Russian bones). My sweetie who was in love with me at the McDonalds drive-through was certain I was Latina and actually came out and asked me once. I let him down gently, but the poor guy looked so crushed! Chris, of course, thought it was hilarious (since we were already married at the time)...

As for that commercial, look online! I'm pretty sure it's Nike, and I know they've been saying when they're going to play it. How funny is it, that they're announcing "show times" for commercials?!? But we soccer geeks love it!