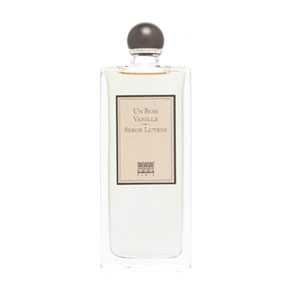 I wanted to wear a vanilla fragrance as I find vanilla to be very comforting. I had every intention of wearing Santa Maria Novella's Vaniglia but I couldn't find my decant *sobs* so I decided to wear Serge Lutens Un Bois Vanille instead. I thought I had mentioned this one before but I guess not.

Aedes describes Un Bois Vanille as: Serge Luten's opulent vanilla scent is composed with black licorice, sandalwood and a hint of coconut milk. Inspired by a mexican beverage recipe back from 1519.

Barney's describes Un Bois Vanille as: Serge Lutens is a revered Parisian perfumer who has created an eclectic collection of scents. Un Bois Vanille is a rich smokey vanilla blended with notes of bitter almond and musk.

And La Creme Beauty describes Un Bois Vanille as: Once upon a time in a vanished world in the wondrous gold laden city of Texcoco, the capital of the Aztec Empire. During a ceremonial dinner servants offered Montezuma gold chalices which contained a foamy drink of made of vanilla, coconut and peppers...which he found very pleasing.

Based on this city that had all the riches life could offer and the gourmand aphrodisiac that Montezuma so enjoyed as the gold chalice touched this mysterious and enchanting concoction to his lips...Un Bois Vanille was born.

Mexican drink?!?! Of all the Mexican drinks to create a fragrance from why did he choose this one? Why not Mexican Horchata, Atole, Champurrado or even Chocolate Mexicano?

Un Bois Vanille isn't my favorite fragrance in the world but I don't dislike it. Sometimes it really works on me and other times it just doesn't. It's a lot more vanilla, black licorice and coconut on me followed by the woods. On a good day, it smells like cookies on me that have been sitting in a wooden cookie jar. On a bad day, it smells like I've been rubbing black licorice on my skin and I'm trying to wash it off with rancid coconut milk and vanilla.

The staying power is really good in this fragrance and I prefer to dab this rather than spray. This is a year round fragrance but I think it's a perfect cold weather fragrance. You know those days where it's snowing heavy outside and you're planted in front of the fireplace reading a good mystery while wearing your perfect, soft and cuddly white cable knit sweater - that's the type of day that this fragrance should be worn. Of course it never snows here and I don't own a white cable knit sweater but you get the idea.

Comments:
Hmmm. Can see it now: SL releases the exclusives Mexican Horchata, Atole, Champurrado and Chocolate Mexicano in '06, '07, '08 and '09, respectively. The Spanish/Incan thing is interesting, considering how much Arabic/Moroccan influence he draws upon. I guess he's just a far-flung guy. xoxo

Wonderful review! At first, I really did not care for the fragrance, until one cold winter evening I sprayed on my sample and found myself enjoying its dark woodsy glory. Simply beautiful!

This is a fragrance that sometimes smells quite beautiful and other times really smells awful.

I really hope someone would create at least a Horchata fragrance - that stuff smells so good. Ground rice, cinnamon and sugar - mmmm!