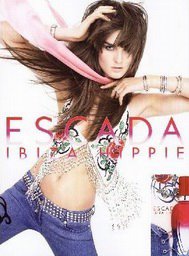 So how'd I do? Well, I didn't exactly stick within my Weight Watchers points yesterday but I didn't serve myself seconds or huge portions. I think I did okay and giving myself some leeway this week - just a little.

Cranberry is the most predominant note on me which was just perfect. It's more of a fresh fruity scent, more like a drink. After a while the freesia comes out more, not enough to hide the fruityness of the fragrance however. A hint of musk rounds out the scent.

This is more of a summer fragrance but I love it as a Thanksgiving scent. With all the scents that mingle in the kitchen, this stands out. The staying power is really good on me and it lasts all day.

Escada Ibiza Hippie is discontinued but can be found online and through Ebay.

For years I'd go shopping on Black Friday but decided this year to stay in my pajamas and shop online instead.

So how much did I spend? Nothing! Well, technically nothing as I had a gift certificate which paid for my purchase. I bought a memory card for my camera which will be $9.99 after the rebate and I bought Cinderella on dvd for $8.99 through Circuit City.

I ordered it at 3:00 A.M. my time as it was already 5:00 in the Eastern time zone and the prices were only valid until noon. I was on the phone with my sister at the time and she ordered the same items and threw in Mariah Carey, Sheryl Crow and Kanae West's new albums for $6.99 each.

About half an hour after we placed our orders, they had already sold out of the memory cards on the website!

One year Target had too many free giftbags and not enough people so they were giving away two per person. We happened to go to another Target later that day and they were still giving away gift bags so I got three that day. In years past I got free gift wrap, stuffed animals, snow globes, a stocking, ornaments and a few other things.

Not too many stores give out free things anymore, not that they need to as the stores are now jam packed and people leave their manners at the door! Ugh, this is what I hate the most about the holidays! Some people are so rude, rude, rude!