Thank you for being a friend? 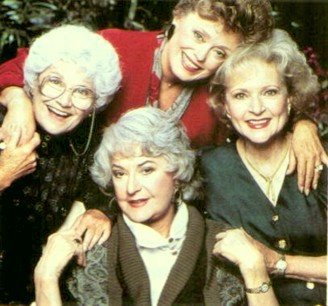 On Friday November 11th, Lifetime television will have a Golden Girls marathon starting at noon EST.

Over a year and a half ago a friend of mine, let's call him Stanley forwarded a politically incorrect e-mail. As it offended me, I told him so and asked him not to send me e-mails like that anymore. He responded that he understood and agreed not to send me such e-mails. So I thought that was the end of the story as the entire thing was between me and Stanley.

Until Stanley's wife, let's call her Dorothy started acting strange toward me. She stopped returning my phone calls and e-mails and when there was a group of us together she'd manage to play up the silent treatment when I was around.

I start questioning what her problem is and what she had against me, claims that nothing is wrong and lets it play on for several months. Meanwhile another friend let's call her Rose also acknowledges that clearly Dorothy is angry at me. After several attempts to contact Dorothy, I fired off an e-mail asking her what her problem was.

She e-mailed me back saying that she didn't like my "tone" in my e-mail response to Stanley's politically incorrect e-mail and that was the explanation for her behavior toward me for months and that she was expecting an apology.

I responded that the e-mail was between me and Stanley and I was over it after I asked him not to forward crap like that to me, it never involved her whatsoever! I even started off that e-mail as "I say this in friendship...."

Then she responded with a rather flip "Well, then I leave this in your hands to contact me regarding our friendship." She demanded an apology from me and then doesn't offer one up when it's clear that there was no reason for her to be mad and nothing to excuse her behavior toward me, especially after ten years of friendship. She was so quick to cast me aside as a friend, why should I bother trying to be hers!

Fast forward over a year and a half to Monday night when my caller id reads a phone call from Dorothy and Stanley's house, I of course refuse to pick up the phone. Rose left a message on my answering machine and I can hear Dorothy in the background. Rose called again ten minutes later and I again let the machine pick it up.

Yesterday, I talked to Rose who mentions that her and Dorothy called me yesterday to let me know that Dorothy is pregnant. She said that the night before while they were trying to call me Dorothy said "Blanche (that would be me) won't pick up the phone, she hates me!"

Rose asks me if I hate Dorothy which I don't of course but she isn't exactly my friend either. Rose then mentions "It's because of Stanley right, because he's an ass?" And I said "Oh no, this all falls on Dorothy."

Rose mentions that everyone is getting together on Friday and asked if I'd go. I tell her straight out that I'd feel incredibly uncomfortable going and would rather not.

Rose asks if I think things will ever be the same between me and Dorothy and I mention that things will never be the same which of course makes Rose sad. Rose asked if everything could be resolved if Dorothy were to call you an apologize. It's not that simple as I'm still angry about the whole thing and it angers me even more that everyone is trying to dismiss my feelings about it.

No, I don't want to get together with everyone on Friday and pretend that everything has blown over and is now okay! It's still not okay with me! I'd rather stay home and watch the Golden Girls Marathon, thank you very much!

Comments:
This has nothing to do with your post, but I found a set of weird paintings someone did of Hello Kitty in gas masks that I felt compelled to alert you about.

sorry about your situation. I love how you incorporated the Golden Girl Characters into the story. They all sound very passive aggressive. I hate that--just ask Keeter.

Can I ask, who was holding Sophia's purse during all of this?

Well, life is short and I don't like bad blood to remain for too long. If Dorothy is willing to aplogize than please let her and let it smooth over. Unless there has been more than one occasion when you felt she had mistreated you. In that case, it is better not to have her in your life. I think Dorothy is a good person, but involved in a relationship with a man who makes her upset. He probably made a big deal out of what he percieved as your rejection of him and showed the email to his wife and threw a big baby fit. He probably makes her miserable and maybe she needs someone to talk to.

Okay, the more I think about the more I feel something is wrong in Dorothy's life. It probably has nothing to do with you. Perhaps you should talk to her and find out.

Those HK paintings are so strange yet so cool! My favorite is HK as a stormtrooper from Star Wars!

I think the dog was holding Sophia's purse, remember the GG spinoff Empty Nest - they showed that dog on GG a few times as they were supposed to live next door.

Dorothy has yet to contact me though we did see each other several months ago. It's so strange to go from being friends with someone for a decade to not talking at all. Maybe things will change in time but it still seems too forced right now.