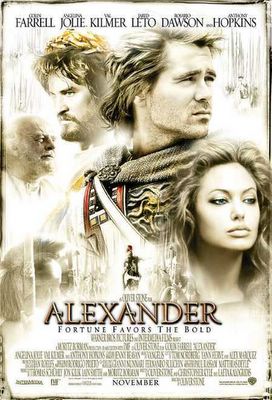 I woke up really early this morning and there was nothing to watch so I ended up watching Alexander. This is my reasoning at 3:00 in the morning: "How bad can it really be?"

Ugh! The narrator of the whole story is a creepy looking Anthony Hopkins.

The story opens up with Angelina Jolie speaking in a funny accent and playing with snakes while talking to young Alexander. Then you're introduced to a chunky Val Kilmer who's got a cycloptic drunk thing going on.

We see young Alex tames a horse - that's about all the taming that goes on in the movie.

He grows up and we see Colin Farrell as Alex. Colin Farrell with dyed blond hair and eyebrows - that's right his eyebrows are dyed blond. Not a light blond but a dirty blond kinda like when you squish yellow Playdoh over brown you get a ugly looking color that you never use and you have to end up throwing it away - that's the color that's going on with his brows!

Alex has several lovers among them Jared Leto and Rosario Dawson. Both Colin and Rosario appear nude but Jared does not!

I kept watching expecting it to get better, then we get to flashbacks that really should have been told in the beginning of the story but in all honestly don't really make much of a difference as by this time you're bored out of your mind!

Then we get back to Alexander conquering land and people turning against him...blah, blah, blah! Typical story. Not seeing any greatness here!

Finally he dies, the end!

By far the worst movie I've seen all year! Don't bother watching this unless you really want to torture yourself.

If you want to pretend you saw this just say things like "I was too distracted by (fill in the blank with *Colin's eyebrows*/*the accents*/*the snakes*/*Val's eye*/etc..) to take in the movie"

Maybe Colin should stick to home movies instead?

Comments:
Ack! And of course I *just* recorded it to watch! And now I *have* to watch it, if only to get a look at those play-doh eyebrows. Is it too much to hope that it's bad enough to laugh at?

girl! I just saw this last week, and it is totally the suck. Unbelievably bad movie. And what on Earth was UP with AJ's accent?

Oh T, it isn't even laughable bad! You want to tear out the memory of this movie from you mind after watching it, it's that bad!