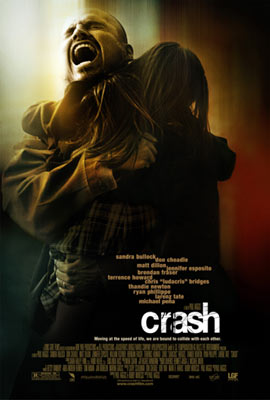 I saw Crash (not to be confused with Crash the movie about freaks who get off on car crashes) which was good, but wasn't as good as I expected.

I had been hearing about the movie and it's all star cast for some time.

All star.........until Tony Danza comes into the picture!

He doesn't play a guy named Tony in this movie!

All star my ass!

Comments:
I didn't like this movie either. The characters were all vile. I couldn't find a thing to like and therefore to empathize with in any of them (except the locksmith, who was the opposite -- almost unidimensionally, simplistically pure and good). I also found the open racism a little unrealistic. Yes, many people don't bother to self-censor, but educated rich white people like those in the film tend to be much more sly about their racism; rarely do they spout off epithets right in front of people of color with the full expectation of agreement. In the real world racist dynamics are hard to attack and overturn precisely because they are carried out with much more subtlety than was depicted in the movie.

Where do you live!!? I have heard very educated white men who are lawyers in Los Angeles say, "Why bother to go into New Orleans...all that's left are the worthless n!@&$#*!" I have been with my Korean-American boyfriend when people in fancy cars in Los Angeles have pulled up beside us looked in the car and called him a chink. Do you or have you ever lived in LA? This is a town where everyone seems to be openly racist, sexist and homophobic. I've been a personal assistant and I've been exposed to people that traet their Mexican household help like dirt. You should see the way people react to Mexicans here!!! I completely went off on a B list movie star because she she told a valet guy, "This is a brand new car so don't sratch it...ok, Poco!!" and the guys name wasn't Poco!

I loved this movie and was happy someone had finally been brave enough to so people what they are.

I found the portrayal of racism to be over the top as well in this movie as well.

As far as personal experience with racism most of it has to do with people thinking it "safe" to say certain things around me.

As I don't look Asian, people have said things about Asians around me and once I speak up about it I get the common "Oh, you know I was only kidding!"

I can think of other examples my family and I have been subject to racism but for the most part it's rather minimal compated to how it was when my parents were growing up.