Rainbow Bridge: For Astro and his beloved Barbara 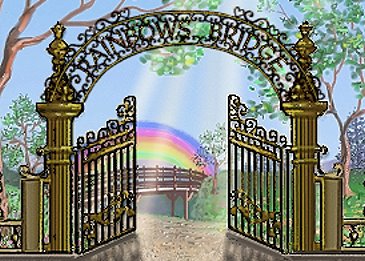 My friend Barbara had to let go of her beloved dog Astro on Monday.

I never had the pleasure to be in Astro's presence but often read about what a wonderful animal Astro was on MakeupAlley "MUA". He was a cancer survivor and a patriot who reminded us on MUA to vote during the 2004 Presidential election. He was beyond adorable and a certain flair for life just like his human!

Astro was Barbara's mostly companion who provided her with love and constant comfort up until the very end. Barbara wrote a beautiful post on her blog today entitled A Letter to Astro.

♥ I am so very sorry for your loss Barbara. ♥

Just this side of heaven is a place called Rainbow Bridge.

When an animal dies that has been especially close to someone here, that pet goes to Rainbow Bridge. There are meadows and hills for all of our special friends so they can run and play together. There is plenty of food, water and sunshine, and our friends are warm and comfortable.

All the animals who had been ill and old are restored to health and vigor; those who were hurt or maimed are made whole and strong again, just as we remember them in our dreams of days and times gone by. The animals are happy and content, except for one small thing; they each miss someone very special to them, who had to be left behind.

They all run and play together, but the day comes when one suddenly stops and looks into the distance. His bright eyes are intent; His eager body quivers. Suddenly he begins to run from the group, flying over the green grass, his legs carrying him faster and faster.

You have been spotted, and when you and your special friend finally meet, you cling together in joyous reunion, never to be parted again. The happy kisses rain upon your face; your hands again caress the beloved head, and you look once more into the trusting eyes of your pet, so long gone from your life but never absent from your heart.

Then you cross Rainbow Bridge together....

Thank you so, so very much for your heartfelt words and tribute to my beloved Astro.

It is a week ago today, that he is gone, and he is so missed.

Blessings and many hugs,
B