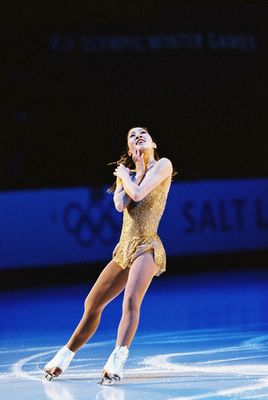 I've been a huge figure skating fan since I was little. I'm talking about back in the day before Vera Wang starting with the wedding dresses. So, naturally I have been a huge fan of Michelle Kwan for a really long time!

On Sunday it broke my heart when it was announced that she was withdrawing from the Olympics due to injury. I was so sad for her and started crying, sucked it up a bit and was okay for a while until they showed the footage of her exhibition program from the 2002 Salt Lake City Olympics, the one where she skated to Eva Cassidy's version of Fields of Gold.

Ah, I started crying again! That was one of my favorite programs ever and I couldn't stop with the waterworks after that performance back in 2002. It still moves me to this day! Seriously, I hear that song and instantly my heart sinks!

Needless to say I needed a comforting fragrance and settled on the sample of Serge Lutens' Gris Clair so generously sent to me by Miss. Trina "Queen of animals and manimals."

Gris Clair is primarily a lavender fragrance and lavender is used in aromatherapy for relaxation purposes so it was a perfect choice.

When I first applied it I thought I had made a huge mistake as it was so incredibly strong and somewhat medicinal on me. It dried down a bit and was semi-strong which I could deal with until it started to smell rather masculine on me.

Now, I don't mind wearing masculine fragrances from time to time and really all fragrances are generally unisex so this isn't really an issue for me. But this wasn't a typical masculine fragrance and I was starting to smell like a man - not to say that men smell - but this was NOT smelling good on me at all! And I'm not talking a George Clooney man either, I'm talking about what you'd think one of the characters on The Sopranos would smell like! Along with the lavender, I was smelling rather smoky, woody which I normally love but this was just awful.

So here I'm crying over Kwan, smelling like a man and out of nowhere I get a massive muscle spasm in my right leg. I wanted the day to be over with! I ended up taking a nap and when I woke up, I had semi-accepted the Kwan situation, my leg felt better and I was smelling spectacular!

It's all about the dry down baby! Gris Clair is stunning on the drydown! That evil man smell went away and was replaced by something beautiful. It was really cold Sunday night and I was wearing my blue scarf which still smells like Gris Clair. It's a shame that the top and middle notes suck so much on me as on the drydown, it's magnificent! I'm quite iffy to declare this full bottle worthy based on that, perhaps a decant will do.

Gris Clair is due to hit the market next month and will retail for $92 I believe.

Days later, the memory of Gris Clair still haunts me, like Kwan's Fields of Gold performance. I'm still so very sad about Kwan, I really wanted her to get her gold metal! Still, I'm so proud of her! She is all class, not only the way she handled this situation but her entire skating career! Brava Michelle!

Comments:
In spite of the successful blue scarf aftermath, I think you successfully cured me of any interest I had in Gris Clair ... thank you! And I'm sad for Kwan, too. xoxo

Brava, Michelle all the way! Having won Bronze is nothing to sneeze at anyway. Plus, she always looked d*** good!