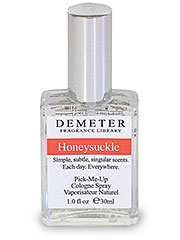 Honeysuckle is one of those floral notes I always enjoy finding in other fragrances. Too often I find it paired up with other notes to make it sweeter than it needs to be so I was hoping that Demeter's version fulfill what I was looking for.

Described as: We wanted this to be the scent of driving by the honeysuckle in June. Honeysuckle 45mph? Our co-founder Christopher Gable remembers this from his childhood in the Princeton, NJ area (yes, there are beautiful honeysuckle strewn lawns in New Jersey!).

Botanically, honeysuckle is the common name for some members of the Caprifoliaceae, a family comprised mostly of vines and shrubs of the Northern Hemisphere, especially abundant in E Asia and E North America. One of the best-known North American species of the true honeysuckles (genus Lonicera) is the trumpet honeysuckle (L. sempervirens), an evergreen plant with fragrant, trumpet-shaped scarlet blossoms that forms the basis for the Demeter Fragrance Library honeysuckle.

Aromatherpists and Homeopathic practitioners believe that the essential oil of Honeysuckle is anti-microbial and works against salmonella, staphylococcus, and streptococcus, as well as an antibiotic against colds, flu's, fevers, sore throats, conjunctivitis and inflammations of the bowel, urinary tract and reproductive organs. At Demeter, we only guarantee the great smell.

Demeter's Honeysuckle has just the perfect balance of sweetness, I detect the smallest tinge of citrus in here. Overall it's really stunning and so true to the flower. One major drawback is that it's incredibly light, too light. I wore this out to dinner on Saturday on a night that wasn't too cool nor too warm. I sprayed myself at least eight times (which is far more than I usually spray), I even applied it in my hair and nobody could detect it on me.

It was far too soft until I took a shower that night, once the heat of the water warmed my skin the most glorious honeysuckle filled my nose. I think this would probably wear better on days where it's much warmer outside, late spring to early summer.

Comments:
ooooohhhhh.... that sounds like a decadent summer smell :) :)

This will be quite wonderful once summer rolls around!

Kate Spade is an amazing honeysuckle perfume- but I think just available on ebay...