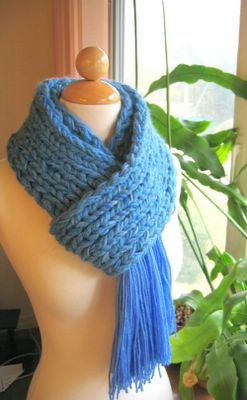 *scarf purchased through Laura's Knittage, Toys, and Other Joys which was hand knitted by Laura Su who is also a freelance illustrator and jewelry designer.*

I was in a serious need of a pick me up last week and ordered this True Blue Dream of Sky scarf.

Friday morning I was angry at myself because I lost over $50 worth of credit on iTunes.

I am such an ass, I thought the credit expired on March 31st - wrong! The gift certificate expired on THE FIRST of March!

Why doesn't iTunes give you a heads up e-mail or something as to when it expires?!?! Ugh!!!

I swear, sometimes I'm such a freakin' moron!

So, I was all upset over that but it was my own stupidity which caused it so I couldn't be mad at anyone else but myself.

So, I was ready to wallow in my self pity once again when by magic my True Blue Dream of Sky scarf arrived!

No! The last couple of days it's been freakin' over 80° so Ihaven't even worn the scarf!

I had a serious case of the winter blues!

I re-named my scarf WINTER BLUES because it was still winter and I couldn't wear it!

Come yesterday where I won a $10 gift certificate to iTunes! *which I'm going to redeem before it expires, thank you very much*

Then today all the sudden out of the BLUE *winks* a cold front moved in! It's going to stick around for a week!

For a whole week I get to wear my scarf!

Things are looking up!